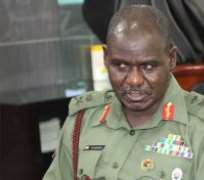 The Nigerian Army has explained why the men of the Army Headquarters Garrison, Mogadishu Cantonment, Abuja, took over the premises of a company belonging to Mr. Robert Azibaola, a cousin of former President Goodluck Jonathan on Saturday.

The Acting Director, Army Public Relations, Col. Sani Usman, told one of our correspondents in a text message that the land in question belonged to the Army.

Usman said the Army decided to take over the property because the service did not want any further encroachment on the property.

He stressed that the Nigerian Army would not tolerate any encroachment on its land.

“The said property is on Nigerian Army's land and the Army will not allow anybody to encroach on its land.

“Consequently, the property has to be sealed to prevent further encroachment,” he stated.

Soldiers had taken over the premises of Kakarta Civil Engineering Limited, owned by the former President's cousin, located along the Kubwa/Asokoro Expressway on Saturday.

The company shares boundary with the Luigi Barracks of the Nigerian Army.

Meanwhile, a Lagos-based lawyer, Mr. Femi Falana (SAN), on Sunday, called on President Muhammadu Buhari, to caution the Nigerian Army for alleged arbitrary use of its powers and use of brute force on innocent citizens.  Falana made this call in a statement, which he made on the heel of the invasion of the premises of Kakarta Civil Engineering Limited on Saturday.

The lawyer said the Army took possession of the property, owned by Azibaola, without a court order.

He said, “Sequel to the illegal action of the Army of occupation, the innocent workers in the company have been sent to the unemployment market.  Although the Economic and Financial Crimes Commission has charged Mr. Azibaola to court for alleged criminal diversion of $40m from the office of the National Security Adviser, he pleaded not guilty to the charge and has been granted bail.

“The implication of the plea is that he is presumed innocent until the contrary is proved by the prosecution.

“The forceful seizure of the property should not be tolerated in a civilised society which operates under the rule of law.”