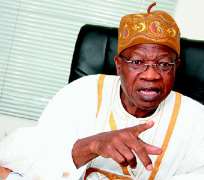 The Minister of Information and Culture, Alhaji Lai Mohammed has explained that the looted fund recovered so far by government is far cry from what the country needs to revive the economy.

The minister said this on Friday when he appeared on a News Agency of Nigeria Forum in Abuja.

According to him, the amount of money recovered is always being made public.

He said, 'What we have recovered and if my record is right is about N78 billion, and 3 million dollars.

'We have been able to block various accounts in which about 9 billion dollars was found but those are not money available to us because we are still in court over them.

'The government spends N165 billion every month to pay federal civil servants, even what has been so far recovered will not even pay 50 per cent of the salaries in a month.''

Mohammed assured Nigerians that every penny recovered will be judiciously spent and nobody could re-loot what had been recovered under the administration.

The minister further explained that Nigerians should understand that what had been recovered was so little compared to what the people needed on a continuous basis.

On budget release, he recalled that the Federal Ministry of Finance released N400 billion for capital projects, mostly on roads, railway, and power.

'N400 billion seems a lot, but you must also understand that for three or four years contractors were not paid.

'But the truth of the matter is that many of them have been paid, they are yet to mobilise to site and they cannot do so until the rains are over.

Mohammed said that what the government owed the contractors was about N2 trillion.