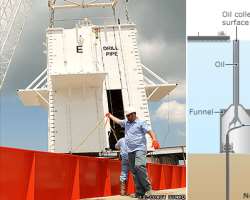 BP is trying to funnel the leaking oil to the surface

The deadly blast on board an oil rig in the Gulf of Mexico was caused by an exploding bubble of methane gas, according to a US media report.

Workers on the rig described hearing “screaming and hollering” and said people leapt into the sea to escape.

The accounts came from a BP report into last month's blast, which has led to thousands of barrels of oil leaking.

Eye-witnesses also said that safety mechanisms did not function and that workers were taken by surprise.

The fresh details about the blast were revealed in interviews with oil rig workers carried out by BP during an internal investigation, Associated Press reports.

The revelations came as a giant funnel was lowered over the oil well in a bid to contain oil leaking from it.

BP, the British-owned oil firm which operated the rig, said it might take up to 12 hours for the steel-and-concrete containment device to settle in place, but that everything appeared to be going as planned.

It is hoped it will be able to collect as much as 85% of the leaking oil and begin funnelling it to ships above by Monday.

Oil from a slick caused by the leak has washed ashore on islands off Louisiana.

'Tears of anger'
Fresh details about the explosion on the Deepwater Horizon rig emerged on Friday. One worker rescued from the rig, Micah Sandell, reportedly said: “There was people screaming and hollering. There was people jumping off the side. I've never seen nothing like that. Never.”

Another, Dwayne Martinez, said: “Everybody was scared to death. Nothing went as planned like it was supposed to.”

The accounts, from BP's own investigations into the blast last month, describe how the blow-out was triggered by a bubble of methane gas that escaped from the well and shot up the drill column, AP reports.

It rapidly expanded as it burst through several seals and barriers before exploding, the documents say.

Details of the documents were revealed by Robert Bea, a University of California Berkeley engineering professor, who has worked for BP as a risk assessment consultant.

BP spokesman John Curry would not comment on the events described in the internal documents. “We anticipate all the facts will come out in a full investigation,” he said.

'Good progress'
US officials announced on Friday that they had closed Breton National Wildlife Refuge to the public after a silver sheen of oil reached the shoreline.

“The refuge closure is important to keep the public safe, to minimise disturbance to nesting colonial sea birds, and to allow personnel conducting cleanup operations and recovery efforts to work safely and efficiently,” the US Fish and Wildlife Service said on Friday.

The BBC's Rajesh Mirchandani, on Dauphin Island, an inhabited barrier island three miles (5km) off the coast of Alabama, says there is a faint but distinct smell of oil in the air.

Some scientists say the oil may be spread more widely. Small, black particles have been found in samples taken from below the surface, away from the visible slick, our correspondent adds.

An estimated 5,000 barrels (210,000 gallons) of oil a day has been leaking for 18 days from the well, 50 miles (80km) off Louisiana, since an explosion destroyed the Deepwater Horizon rig last month, killing 11 workers.

Although the rig was operated by Transocean, it was leased by BP, which is responsible for cleaning the 3 million gallons that have so far leaked, creating a slick covering about 2,000 sq miles (5,200 sq km).

The company hopes the 98-tonne containment device, once operational, will allow it to collect oil leaking out of the well while it attempts to stop the leak altogether by drilling relief wells nearby.

Earlier, remote-controlled submersibles guided the 40ft (12m) funnel above the wellhead, some 5,000 ft (1,500m) below the surface. The technology has only ever been used in shallow waters.

“It appears to be going exactly as we hoped,” BP spokesman Bill Salvin told the Associated Press. “Still lots of challenges ahead, but this is very good progress.”

Now that the containment device is on the seafloor, workers will need at least 12 hours to let it settle and make sure it is stable before the submersibles can hook up a pipe and hose that will funnel the oil up to a tanker.

“We are essentially taking a four-story building and lowering it 5,000 feet and setting it on the head of a pin,” Mr Salvin added.

If the box works, another will be dropped onto a second, smaller leak.

Experts warn that there is still a risk that any wrong move could damage the leaking pipe and make the problem worse. It is also possible for the pipe to the surface to become clogged with ice, and for the subsequent separation of the oil, gas and water to cause an explosion.


Fears are growing for the safety of the area's manifest wildlife

In the meantime, residents of Louisiana, Mississippi, Alabama, and Florida await news of when the oil will reach their shores.

BP said emergency teams had been sent to Freemason Island, a favourite fishing spot for recreational anglers some 30 miles (50km) off Louisiana's coast, to deploy inflatable booms to protect its prime marshland.

Fears are growing that sea life may have been severely affected in the area, which includes vital spawning grounds for fish, shrimp and crabs.

The attempt by BP to lower the funnel comes as Secretary of the Interior Ken Salazar called for a halt to permits for new exploratory drilling in the US, pending a 30-day investigation into the cause of the oil spill.

Some environmentalists are now calling for a permanent ban on offshore drilling as a result of the spill.