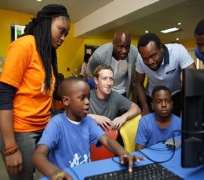 By Reuben Abati
Mark Zuckerberg's two-day visit to Nigeria has done a lot for the country; it is a pity no government official or agency has tried to tap into the gains of that visit. He arrived at a time there was much talk about economic recession, concerns about companies folding up or retrenching staff, or international investors leaving the country in droves, out of frustration with the uncertainties in the system. Zuckerberg's arrival raised our hopes: co-founder of Facebook and the 5th richest man in the world, sneaked into Nigeria to meet with developers and entrepreneurs and to discuss investments in Nigeria's growing start-up ecosystem. And for two days, he went round the city of Lagos, visiting start-ups and interacting with young entrepreneurs.

The way Nigeria is often painted abroad, and in those travel advisories that foreign ministries issue, you would think Nigeria is such an unsafe place where kidnappers are permanently on the prowl. Zuckerberg helped to show the rest of the world that Nigeria is not so bad at all, and that something really exciting is happening here among the country's young population. He had no bodyguards. He did not have to hire a lorry load of Nigerian policemen to keep watch over him. He trekked on the streets of Lagos, surrounded by a few of his hosts. On Wednesday morning, he jogged across the Ikoyi-Lekki bridge. He ate pounded yam, shrimps, snails (I thought they said he is a vegan!) and jollof rice (Nigerian jollof (!) not that one from Ghana). His visit went smoothly. More investors may well be encouraged to visit Nigeria too, seeing how confidently a whole $53.7 billion walked freely about in Nigeria, and he was not stolen or kidnapped.

Zuckerberg's visit also provided great publicity for Nigeria's emerging Silicon Valley, and the young entrepreneurs to whom Zuckerberg paid compliments. He has already invested in a Nigerian start-up, Andela, and he has made friends with other young Nigerians, the guys behind Jobberman and C-Creation Hub (CcHUB) and so many others. Zuckerberg cut the picture throughout his visit of a true inspirational figure. His simplicity and humility was impressive. He kept going about in a T-shirt, and interacted freely with everyone he met.

Many young Nigerians can learn from his example: the way some people whose biggest possession is a laptop sometimes carry their shoulders in the sky, if they were to be half of what Zuckerberg is, they won't just claim that they are voltrons or overlords, they will look for more intimidating labels. But Mark Zuckerberg, who is just 32, shows that it is not all about money, or influence, character matters. There is no doubt that his hosts were also impressed with him.  And that probably explains the protest that greeted the attempt by CNN International and American artiste, Tyrese Gibson, to refer to the visit as Zuckerberg's visit to sub-Saharan Africa. Young Nigerians kept shouting back that Zuckerberg is in Nigeria, not sub-Saharan Africa! They wanted the publicity for their country.

Inspired by Zuckerberg's visit as the tech entrepreneurs in Nigeria's Silicon Valley may have been, the Nigerian government should see in the visit, and the excitement that it has generated, the need to provide greater support for technological innovation in the country. There are many young Nigerians out there who are gifted, hardworking and innovative. They belong to the 21st Century. They are aggressive. They want to operate at the international level and become superstars. They have ideas. They are ready and willing. The basic thing that government owes them is to provide an enabling environment for their talents to flower. It has taken a few young men and ladies to bring Mark Zuckerberg to Nigeria. There are other young Nigerians doing wonderful things in other sectors of the economy who can save this country if they are given the chance. There is also a large army of untapped and yet-to-be-discovered talents, whose future we cannot afford to waste. Investment in education will help. Uncommon sense will make things happen.

Zuckerberg's visit also did a lot for Nollywood. He described Nollywood as 'a national treasure'. That statement should be framed and sent to every major agency in the private and public sectors in Nigeria. He may not yet have invested in Nollywood, but there was no doubt that the members of Nollywood and other celebrities who met with him appreciated their being recognized by one of the most successful young men of the 21st century. I watch Nollywood movies, but I don't think I have ever seen those Nollywood stars who met with Zuckerberg smile that heartily and broadly – not even in the movies. The ones who did not bare their 32, were staring at the Facebook ambassador in that typical Nigerian fashion: 'ah, see money, Mark, abi make I send you script make you sponsor?'

The way the visit went, if Mark Zuckerberg had wanted a Nigerian wife, or girlfriend, he would have been met at every turn with echoes of 'Yes, Yes, Yes…come and hold something.' But he is already married. So, don't worry, Priscilla Chan (Mark's wife), your husband is safe, Nigerian ladies will only admire him, they don't mean any harm, and they won't initiate him into coded runs.  But of course you trust him – you know he is not Justin Bieber. But money is good oh. After money, it is money. Ha, Ori lonise, eda ko la'ropin o, Edumare funmi ni money…

Altogether, it was a great business outing for Zuckerberg and Facebook. Over 16 million Nigerians are on Facebook, it is the largest and most influential social media platform in the country; on a daily basis, over 7 million Nigerians log onto the website. Many more are on whatsapp, another Facebook acquired platform. With Zuckerberg's visit, that number is bound to grow.  The strategic friendships and partnerships that he has been able to build is a demonstration of power and influence: Facebook is on the ground in Nigeria, the most populous country in Africa, and he has taken that further by visiting Kenya – look beyond the T-shirt, this young American billionaire is building constituencies and spheres of influence across Africa; he is exploring new markets and staying ahead of the competition in a continent that many other investors may overlook, or desert for reasons of inconvenience.

As a business strategy, Mark Zuckerberg's exploration of the African market is brilliant. It may be the subject someday of a Management, Leadership and Marketing Class. Businesses must innovate, innovate and innovate and the best way to do that is through people.  Nigerian entrepreneurs have a lot to learn in this regard: the mindset of the business leader is the soul of strategy. There are too many thermostatic leaders in the Nigerian business environment, and that is why at the slightest confrontation with hard choices, they close shop and run. Here is Mark Zuckerberg, in the face of proven recession, he wants to support start-ups and SMEs in Nigeria; at a time others are fleeing, he is coming into Nigeria and Africa. He is smart. Wicked problems in a business environment should inspire genius, change and innovation. That is what leadership is all about.

Beyond business and culture, there was a small political side to the Zuckerberg visit. The Facebook CEO had said Facebook will promote the use of Hausa Language, some reports indicated he had said he loves Hausa language, and then a storm followed, resulting in a hot, healthy spat between two friends, colleagues and brothers of mine, Femi Fani-Kayode (@realFFK) and Reno Omokri (@renoomokri), with one claiming that Americans are promoting Northern hegemony (John Kerry, now Zuckerberg and Facebook), and the other saying it is not a big deal, and in the exchange, we got some lectures about Nigeria's ethnic and hegemonic politics.

On Wednesday at a town hall meeting, Zuckerberg more or less edited himself by saying 'I am glad we support Hausa, and we are planning on supporting more languages soon.' He didn't specify what those other languages are. I hope he knows Nigeria has over 400 languages and ethnic groups, and they all form part of the Nigerian Facebook community. He should tread carefully here, because I am not too sure Facebook can adopt Yoruba language before Igbo, or vice versa, without a social media war on its hands, and if Facebook chooses to accommodate the three major languages in Nigeria, it could be confronted with a major battle over minority rights on its platform. We are like that in this country, Mark.

But the difference is that Mark Zuckerberg is not a politician, he has voted only once (in 2008) and he doesn't make political statements, except when business interests are at stake. Eyin boys, FFK and Reno, Zuckerberg doesn't really care about the local fights we fight: he wants to create new markets and if promoting Hausa on Facebook will create more customers in that part of Nigeria, so be it. And in case religion is part of that politics, it doesn't concern him either, he was born Jewish, but he is a self-declared atheist. If he worships any religion, it is the religion of Facebook. In Nigeria, he has Igbos, Yorubas and other Nigerians working for him. ( https://techpoint.ng/2016/08/ 31/nigerians-working-with-mark -zuckerberg-facebook/ ).

He is interested in their intellect not where they come from.  One more thing: The Nigerian government snubbed him or did he snub our government? When he got to Kenya, he was received at the airport by the Cabinet Secretary of Information and Communications and later given a delicious lunch of fish, semo and soup ( https://techpoint.ng/2016/09/ 01/mark-zuckerberg-in-kenya/ ), no Nigerian government official offered him common sachet water and yet he was here to create jobs and markets! We shouldn't frighten him away with our politics! The good news, though, is that he is a humanist even if a secular humanist: End of story. Thank you Marky, for the visit and for giving us a good story to tell.