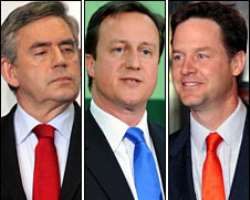 Liberal Democrat leader Nick Clegg is set to hold talks with his MPs as he weighs up the offer of a power-sharing deal with the Conservatives.

More than a day after the polls closed, it remains unclear who will lead the country after the general election delivered a hung Parliament.

David Cameron approached the Lib Dems after the Tories won the most seats but finished 20 short of a majority.

Labour leader Gordon Brown also said he was prepared to talk to the Lib Dems.

Senior figures from the Lib Dems and Conservatives held talks on Friday night following Tory leader David Cameron's “big, open and comprehensive” offer to work together to form the next government.

It came after the Conservative leader offered an “all party committee of inquiry on political and electoral reform”.

However, he did not pledge a referendum on changing the voting system – a key concern of the Lib Dems.

Leaving the Cabinet Office late on Friday, after the hour-long discussion with Lib Dem counterparts, the Conservatives' William Hague said: “We've had an initial meeting. That's all there is to say at the moment.”

And Lib Dem energy spokesman Simon Hughes told journalists: “Things are going properly. Things are going carefully. I am not going to speculate. You'll just have to wait.”

Mr Clegg will meet his MPs and his executive committee later to meet to discuss Mr Cameron's proposals in the wake of the first general election to deliver a hung parliament since 1974.

BBC political correspondent Peter Hunt said the Lib Dem leader “will have to keep his party with him”.

On Friday Mr Cameron had a “very constructive” conversation with Mr Clegg by phone, although there was little discussion of details, the BBC understands.

The Tories secured 306 of the 649 constituencies contested on 6 May. It leaves the party just short of the 326 MPs needed for an outright majority, with the Thirsk and Malton seat – where the election was postponed after the death of a candidate – still to vote.

Past practice under Britain's unwritten constitution involves the sitting prime minister in a hung Parliament having the right to make the first attempt at forming a ruling coalition.

But Mr Cameron said Mr Brown had “lost his mandate to govern” after the Conservatives won the most votes and the most seats.

And Mr Clegg said he believed the result gave the Tories the right to seek to govern first.

Mr Cameron referred to the “outgoing Labour government” in his speech. But Mr Brown said he was making his statement “as prime minister with a constitutional duty to seek to resolve the situation for the good of the country”.

The Conservative leader said talks would begin with other parties. He said one option was to offer them reassurances about certain policy areas – then try to govern as a minority Conservative government.

But he said it might be possible “to have stronger, more stable, more collaborative government than that”.

“I want to make a big, open and comprehensive offer to the Liberal Democrats. I want us to work together in tackling our country's big and urgent problems – the debt crisis, our deep social problems and our broken political system,” he said.

While there were policy disagreements between the Tories and Lib Dems – including on the European Union and defence – there were also “many areas of common ground”, he said.

BBC political editor Nick Robinson said that while he doubted the Lib Dems would take up the offer of a formal coalition, they might be prepared to let Mr Cameron govern by not voting down the Queen's Speech or Budget. Taking that option would allow them not to be tainted by decisions they did not like.

Former Conservative prime minister Sir John Major told the BBC offering the Lib Dems cabinet seats was “a price, in the national interest, that I personally would be prepared to bear” for the formation of a stable government able to manage the economic crisis.

Earlier, outside No 10, Mr Brown said he would be “willing to see any of the party leaders” adding: “I understand and completely respect the position of Mr Clegg in stating that he wishes first to make contact with the leader of the Conservative Party.”

But he added “should the discussions between Mr Cameron and Mr Clegg come to nothing… I would be prepared to discuss with Mr Clegg the areas where there may be some measure of agreement between our two parties”.

He said there were areas of “substantial common ground” – including reforming the voting system and plans to ensure economic stability, he said.

Mr Clegg – whose party has done worse than in 2005 despite favourable opinion polls – said that he believed the Tories had gained the “first right” to attempt to form a government in the “national interest”.

Speaking outside Lib Dem headquarters in London, he said: “It is vital that all parties, all political leaders, act in the national interest and not out of narrow party political advantage.”

Downing Street has authorised the civil service to support other parties in hung parliament negotiations – essentially giving the go-ahead for talks to begin.