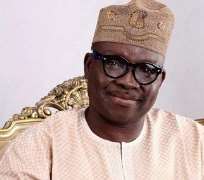 BEVERLY HILLS, August 29, (THEWILL) – The Ekiti State governor, Ayodele Fayose has declared that any herdsman henceforth caught carrying arms or any weapon while grazing in Ekiti would now be charged with terrorism and be made to face the law accordingly.

The chiefs had been invited by the Governor for the meeting at the Osuntokun hall of the government house in Ado-Ekiti, Ekiti State capital.

Any herdsman caught with firearms and any weapons whatsoever during grazing shall be charged with terrorism. Any cattle confiscated shall be taken to government cattle ranch at Erifun in Iworoko community. Any farm products destroyed by the activities of any caught herdsman shall be estimated by agricultural officer and the expenses of the estimate shall be borne by the culprit. Any herdsman who violates any of these rules shall be imprisoned for six months without option of fine.”

He said that he recognized the need for his government to work with the chiefs to give valuable information on activities of those who plunder state resources such as trees, farmlands and others.

Speaking about the anti-grazing law, the Governor said: “My government took the bill to the House after what happened in Oke-Ako some months ago. the House has passed the bill and I have to assent it, it becomes a law from today that if you do anything to the contrary you will be punished by the law. Any herdsman caught with firearms or any weapon while grazing in Ekiti now will be charged with terrorism.

“I solicit for your support for this government to succeed. This is not about party politics and Ekiti should be our primary concern. I’ll continue to call you for this kind of meeting every three months to give accounts of governance.

“We want to involve stakeholders in the preparation of the budget, a bottom up approach, we want to maintain the lead of being ranked first as performing best in budget implementation as we did last year.”

Fayose also gave room for an interactive session with the chiefs who used the opportunity to air their views.

The forum also gave room for the government to present achievements of the Ayo Fayose administration to the chiefs and also presented a rundown of all the federal allocation that came to the state treasury since last year, with an indication that the state was having developmental challenges due to the continuous reduction in allocation coming from the federal government.