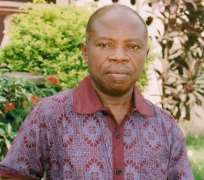 The group said that the award was an attempt to appreciate the uniqueness, meekness, humility, and positive and dynamic changes Aliche, through his numerous contributions, have brought to the sociiety in general, and the church in particular. The award was conferred by Rev. Fr. Peter C Nwosu.

Responding to the award, Professor Aliche thanked the group for adjudging him fit for the award.

He said that the award would spur him to do more, adding that he would not relent in rendering services to humanity.

Professor Aliche, a distinguished Professor of Natural Law and Philosophy, is an author, farmer, teacher, philosopher, conference speaker, metaphysician and publisher with over 2,000 books to his credit. He has proved his mettle as one of the world's best writers.

Professor Aliche has written books in virtually all fields of human endeavour and they include The Natural Dynamics of Imaginative and Creative Technology; The Dynamic Concept of Philosophical Mathematics; Have You Discover Your Assignment with Destiny; The Role of Ethics and Morals in Corporate Governance; Business Management and How to Achieve Organisational Goal.

Others are Metaphysics and Astral Physics( A New Cosmogony of the Astral Plane as Empowered by the Wisdom of the Rare Knowledge); Mystics and Challenges of Mysticism; The Adventure in Wisdom; The Mystical Life and Priesthood of Melchizedek; The World is in Need of You; The Encyclopaedia of Metaphysics;The First Principle of Science ( The Atmosphere of the Sun and Moon with other Elemental Beings Existing at the Proximity of Psychic Phenomenon); Understanding the Dynamic Creative Process Through the Waves; The Anatomy of Alchemy and Transmutation; Business Management and How to Achieve Organisational Goal; The Principles and Policies of Research Methodology; Contemporary Issues Which Determine the Dynamic Functions of Business Management; and The Dynamics of Effective Marketing, among numerous others.

His work" The Natural Dynamics of Imaginative and Creative Technology, which was translated into other languages of the world icluding Chinese attracted an Award of Excellence to him from Washington DC in November 2015.

His research efforts have produced the following: The need to involve the Private Sector in the Economic Development of the nation; How we can use our Inherent Genius to Develop our Technology;The importance of Globalization in the Advancement of our Economy; The Benefits of Small and Medium Scale Industries in Nigeria;The Role of the Banking Sector in the Actualization of the Millennium Development Goals;Proposal on the Importance of Accountability, Probity, Financial Prudence for Civil servants and Political Appointees in Nigeria.

He hails from Umuoha Autonomous Community in Isiala Ngwa, Abia South. He attended St. Mary's Primary School, Apa na Ekpu, and Ihie High School both in Isiala Ngwa North Local Government Area between 1968 to 1980. His thirst for further education drove him to Concept Institute of Therapy, Texas, USA between 1980 and 1982. From thhere he proceeded to University of Science and Philosophy in Virginia, USA.