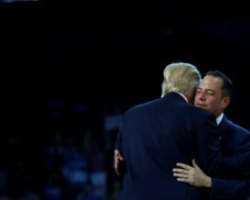 Republican National Committee Chairman Reince Priebus said that if you want to know the specifics of Donald Trump's immigration policy, you'll have to ask the real estate magnate himself.

The GOP leader declined to spell out what his party's presidential nominee planned to do about the estimated 11 million undocumented immigrants living in the United States during an appearance on NBC's “Meet the Press” Sunday.

This distancing comes after a week of Trump softening his anti-illegal-immigration stance , which had included calls for a deportation force to kick out every undocumented immigrant. The reality TV star now says that he will immediately deport violent criminals and put the rest through a fair but humane process.

“Well, you're going to find out from Donald Trump very shortly,” Priebus said. “He's going to be giving prepared remarks on this issue, I think, very soon. I don't want to give a date.”

Todd replied, “We don't know? I mean, it is sort of remarkable that we don't know.”

“I don't speak for Donald Trump. That's what I do know,” Priebus said. Then he broke down what his party's standard-bearer has promised to do about the U.S.-Mexico border and deporting violent criminals but declined to elaborate on the presidential candidate's plans for nonviolent undocumented immigrants.

Priebus conceded that Trump had simplified his immigration policy during the primaries but is now reflecting on it. Regardless, he said, Trump would be tougher on illegal immigration than any presidential candidate the U.S. has ever had and will be a “law and order president.”

Todd asked what Priebus thinks of political analysts who argue that Trump has backed down from his radical policy to something that's more or less former presidential candidate Jeb Bush's policy.

“No, I really don't [think this is Bush's policy], because I think that you're not going to see an easy path to legalization. You're not going to see that in a Donald Trump plan,” Priebus said. “That's off the table. There is no method by which someone is here illegally that is going to become a citizen and jump the line as [Democratic presidential nominee] Hillary Clinton wants to do.”

Just as New Jersey Gov. Chris Christie said on ABC's “This Week” Sunday, Priebus said people should focus on the real issue: the difference between the immigration policies of Clinton and Trump.

“She wants to put [President] Barack Obama's immigration plan on steroids. She wants millions of people who are here illegally to cut the line,” Priebus said.

Todd pointed out that Donald Trump's official campaign website still says he will end birthright citizenship and asked Priebus if that should be the Republican Party's stance on this issue.

Priebus added that a Republican presidential nominee is not obligated to toe the party line on every issue. He speaks with Trump every day and knows what he thinks about a lot of these issues, he said.

“This is a good and decent man that wants to do the right thing,” Priebus said.