Is It Really Good Night For Pdp? 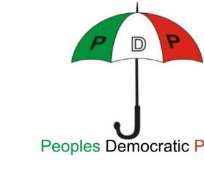 In mathematics, especially in geometry, Pythagorean Theorem is a fantastic numerical combustion that I found very interesting. It is quite long experiences in the secondary classes. There, our mathematics teacher pronounced theorem so fast in such manner that once he started to solve any, all the students would await was Q.E.D. which are initials of the Latin phrase _quod erat demonstrandum_, meaning “which is what had to be proved.”

The theorem of the Peoples Democratic Party (PDP) has to be proved in context of the geometric reality of Nigeria today. For a party that super-powered the affairs of the largest population of the black race on earth for nearly two decades, to accept a parting handshaking cannot be as easy as ABC. But with the happenings in the party and predictions by the key founders of the party, is its swan song nearby?

For 16 years, the PDP, founded on the premises of military-civilian partnership by prominent Nigerian patriots maneuvered the leadership of the country, inconsequentially, on the twisted scale of popularity and sympathy. There was quite no better option for Nigeria by that time as  all of us and the world needed our return to democracy. A lot of Nigerians then were meek political animals being told what to do even  against their own will. Nigerians were dragged from 1999 to 2003, until:“Like a loyal child; Feeling the pain of torture and denial; We staggered and stood on our feet; And looked into the eyes of the master; And shouted, freedom, freedom, freedom! This is culled from my poetic book on Nigeria titled: Sing to me, Nigeria

The crisis rocking the PDP, some analysts hold, reveals of a group of persons who have never believed or practiced democracy; a cluster of kleptomaniac marauders who sucked Nigeria without recourse to reckoning and a bunch of opportunists whose intents were selfish, parochial and self-centered. Recall 60 years was a projected span for its leadership. And throughout the 16 years, much filth, official abuses and intellectual fallacies weakened and rendered it unpopular. This is to the extent that almost all the erstwhile political bulldozers are on the run; either openly bidding the party farewell or covertly disassociating  themselves from it

To some other analysts, PDP is still leading. Diehard could be a mild abstraction. Within the 16 year race or match against Nigeria, it defeated Nigerians 4-0. In March 2015 or to be precise on May 29, 2015 the results changed to 4-1 with difficulties and uncertainty. Its  strength remains in power energy – money. They are still heavy with stolen commonwealth. Most of the PDP elders were contractors who collected money and never delivered a tinge. The few other contractors who probably were not full-card carrying members had to get below 30% of the contract amount after the figures have been mutilated or padded. The 10% contract discount used to appease those who cooperated in the contract approval was no longer a reality. Who cared and who checked who? The national assembly was dominated by its members who padded the nation's wealth into their pockets. The executives were demigods who distributed, at freewill, resources meant for security, infrastructure, et al. Large chunk of those monies is still with them and still the reservoir they recline on. In just five years, the exact whereabouts of 51 trillion US dollars is unknown. Yet, “We borrowed 473 billions to pay salary every month”, revealed former Minister of Finance and economic coordinator, Dr. Ngozi Iweala. Though popularity and pedigree played serious role in the last general polls, politics remains capital intensive. And that has been the gunner for the PDP.

An option heaped upon the party is to change its nomenclature. A known criminal cannot change his clothes and expect acceptance by the neighbourhoods. The truth is that Nigerians are tired of the faces in the party, not on the grounds of esthetic. The faces have become gloomy, dummy, fussy and filthy for concerned Nigerians to glance at with awe as before. At least for the repentant ones who are now associating with reality, Nigerians are humans who believe that to forgive is divine. But most politicians are chameleons.

Otherwise, by 2019, 2023 and 2027, if the equalizer is scored to make it 4-4, the PDP will accept defeat. For now, the fight continues. The deceit increases. And its hanged hope and surprises thicken. After all they are Nigerians and still constitute certain percentage of the incumbent government tagged: “Go-slow administration”. They have helped in slowing the government the more, though slow and steady wins the race.

The PDP has fallen apart and the founders have lost interest in it. Former Governor, Modu Sheriff and former Senator, Ahmed Makarfi are at their jugulars over the leadership of the party, dancing the tunes by the courts. What equation the Sheriff versus Makarfi faceoff will produce is palpable. The zoning formula of the party has ever been a case study. Grouping and regrouping have become the party's resort. The party's failed August 17, 2016 convention in Port Harcourt cannot write a report of progressive people. Comments from the party's current and former leaders are revealing.

Troubled National Publicity Secretary Olisa Metuh, at a press conference on Monday, May 4, 2015 declared that some members of PDP including ambitious aides and associates of President Goodluck Jonathan used their perceived closeness to him to further their heinous agenda of injecting crisis in the party with a view to highjacking the structure for their selfish interests. Part of the agenda, he claimed, was to create an impression of division and crisis and pave the way for members' decamp to other parties in view of the Supreme Court ruling on defection in the  event of leadership crisis at their party's national level.

Former President Olusegun Obasanjo noted that the party's crisis heralds its end. “You cannot say 'good night' and come to say 'good evening' in the same place. So for me, it is good night for the Peoples Democratic Party (PDP) and that's all,” he said. This is the one time Chairman, Board of Trustees of the party who tore his membership certificate before the 2015 elections in the presence of party loyalists.

.
A backbone of the party, Bode George fumed after the failed convention. He sees an already divided party subsumed by disintegrated blocs within. To him, the Yoruba equalizing strength is threatened. The marriage between Rivers and Ekiti governors to him is a betrayal of the Yoruba interest. “Wike will now tell Yoruba people who should represent them? That is madness. I think he is under a spell or something. Yoruba will never go to Port Harcourt for any convention again. Quote me, Wike is too small to summon Yoruba leaders. We will not allow him to rubbish us. We will not leave the PDP for him. It is now crystal clear to us exactly what Sheriff suffered in their hands. May God forgive us, Sheriff is a saint compared to Wike or Fayose. Sheriff understands exactly their antics. Fayose told us he burnt his fingers the first time, now he has burnt his whole body”, Bode squealed.

To former president Jonathan, the party is merely running after his shadows.  He rejected PDP's offer to chair its Board of Trustees, a seat that is supposed to be occupied by ex-president of the party. The party's former BoT chairman, Tony Anenih, seems to be chewing his words. He claimed to have resigned his position to pave way for Jonathan before Haliru Muhammad Bello, a former defence minister and acting chairman of the party took the full mantle.

Others like Jerry Gana and Ibrahim Mantu as well as Raymond Dekposi are carefully sorting on the murky waves of the party. Sources said the former Borno governor rescued the party from its financial difficulty and used his personal funds to run the party, yet some founding fathers regrouped to disband him in favour of Makarfi. These two groups, and probably a third unpronounced one, will revive the party or bury it by 2019. Let the game continue.

Written by Muhammad Ajah, an advocate of humanity, peace and good governance.