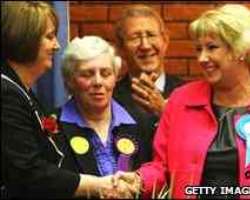 Conservative leader David Cameron said it was “clear” that Labour had lost their right to power, after the Tories gained the most seats in the election.

He promised to act in “the national interest” to bring “strong, stable, decisive and good” leadership, as the UK appeared set for a hung parliament.

He also achieved a 6.3% swing from the Lib Dems in Witney.

Uncertainty remains as to who will form the next government.

Gordon Brown is still prime minister, however, and may now begin coalition talks with the Lib Dems.

Tories go from three to eight MPs in Wales
Only one Conservative MP in Scotland
Among the Conservatives' successes was a victory in Redditch, where Karen Lumley defeated the former Home Secretary Jacqui Smith, with a majority of 5,821 on a swing of 9.2%.

The Conservatives more than doubled their tally of MPs in Wales, taking four seats from Labour and increasing their representation at Westminster from three to eight.

But in Scotland, the Tories have only one MP – David Mundell, who held Dumfriesshire, Clydesdale and Tweeddale.

“Nationally we have to wait for the full results to come out, but I believe it is already clear that the Labour government has lost its mandate to govern our country,” Mr Cameron said after winning his seat.

“We will stand ready to do all that we can to help bring that leadership, to help bring strong, stable, decisive and good government for our country.”

He said he would act in “the national interest – to do what is right for our country, to make sure we have that government, have that stability, take the right decisions”.

But the Welsh Secretary, Peter Hain, said voters had shown “they are not willing to trust David Cameron and the Conservatives with government on their own”.

“They are not willing to have a majority Labour government either,” he conceded to Sky News.

Shadow schools secretary Michael Gove did not rule out talks with the Liberal Democrats and said Mr Cameron was “happy to talk” to other parties so there was a “strong and stable” Conservative-led government.

And shadow work and pensions secretary Theresa May said Labour had “clearly lost” the election.