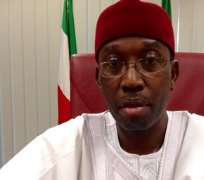 Delta State Governor, Senator Dr. Ifeanyi Okowa has expressed satisfaction with the number of investors indicating interests in doing business with the state, saying that Nigeria cannot meet its potentials without partnership between government and the private sector.

According to the Governor, South African investors were in the process of establishing a tertiary health facility in the state, while others have come to partner with the state in the area of agriculture and mining.

The Governor stated this when the Consul-General, Lagos office of South African Consulate, Mr Darkey Africa paid him a courtesy visit in Asaba.

“Greater partnership between the private sector and government will help develop our nation,” he said, adding, “we are carrying out advocacy to private investors in other to develop our state; we are happy in the involvement of South Africans in our developmental programmes.”

He reiterated, “some South Africans investors intend to build a tertiary hospital in our state, some have come to partner with us in the area of agriculture and we know that South Africa has been involved in mining for a very long time, so, your presence will be appreciated in that area in our quest to diversify our economy.”

To strengthen partnership agreements with investors, Governor Okowa disclosed that the Delta State House of Assembly was working to strengthen the Delta State Investment Development Agency law to enable the state partner effectively with the private sector and investors.

He commended the government of South Africa for encouraging partnership between the country and Delta State, assuring that his administration would always provide the enabling environment for investments to thrive.

Earlier, Mr Africa had told the Governor and members of the state executive council that he was in the state to explore areas of partnership between his country and the state, disclosing that they have experts in many fields including agriculture, energy and mining which will be beneficial to all.

He particularly commended Governor Okowa’s administration for encouraging the establishment of commercial farms in the state.