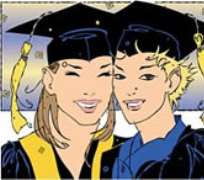 The American University of Nigeria, Yola has last weekend released the names of 67 who sat and passed the attitude scholarship test in Yola.

The scholarship which will only cover 2016/2017 academic session which cut across the six geo-political region in the country.

"Apart from the national scholarship that covered ALL costs of attendance, each scholarship in a category covered 50% of tuition. A candidate could win in up to two categories (50% state and 50% regional) if they were one of the top 5 highest scorers in their region and also the highest scorer in their state for a combined win of 100% coverage on tuition." He said

He continued to say that a total of 45 students won 64 of the scholarships, while two state scholarships were not awarded because 2 states did not feature a contestant.

According to him on 1 student won the National Scholarship; 20 students who won a regional scholarship each also were the highest scorers in their states and won 20 of the 36 state scholarships offered, making a total of 40 scholarships awarded in this group;

14 students won 14 of the remaining scholarships in the State Scholarships category.

"The North Eastern examination centre in Yola registered the highest number of candidates for the examination with 98 candidates, followed by the North Central region at Abuja with 67, and North Western centre with 45. The South Southern and South western centres in Warri and Ibadan respectively had 18 candidates each, while the South eastern centre had 28 candidates."He added

The AUN scholarships examinations are highly competitive and only the best can qualify for the available merit-based scholarships. These deserving Nigerians will join their counterparts from South Africa, Rwanda, Cameroon and other African countries on scholarship from their respective governments or private educational foundations in their countries to study in Africa’s Development University. There are many other students enjoying scholarships from their state governments in the university which prides itself as the School for the Best and Brightest.

What has added more excitement to this year’s examinations is the introduction of law studies by AUN with effect from August this year. The first batch of law students is expected to matriculate in the Fall semester with enrollees in older programs.