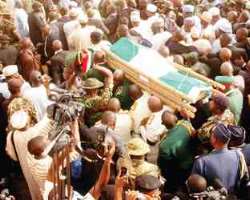 The burial of the remains of former President Umaru Yar'Adua was almost marred by violence on Thursday as hostilities broke out between youths and security agents at the gates of the Katsina Township Stadium.

Trouble started when the security agents manning the gates tried to prevent the youths from entering the stadium to witness the burial which was not attended by the newly inaugurated President, Dr. Goodluck Jonathan.

Angered by the attempt to stop them, the youths went on the rampage, hauling missiles at the soldiers and policemen who in turn threatened to shoot them.

Governors Rotimi Amechi (Rivers); Adams Oshiomohle (Edo); Theodore Orji (Abia); Liyel Imoke (Cross River); Sullivan Chime(Enugu); and Peter Obi (Anambra) who were almost caught up in the melee had to go to the Yar'Adua family house instead of the stadium.

One of our correspondents at the scene reported that the governors were shielded from the missiles thrown by the protesting youths by their security aides.

The security agents also had a tough time controlling the crowd at the Dan Marna Cemetery where Yar'Adua's body was interred.

At a time, they had to fire shots into the air to scare away the crowd to make way for the corpse to be taken into the cemetery. The panic created by the shooting almost led to a stampede.

Security agents had a first taste of the challenge that would face them during the burial as the crowd at the airport defied their stay-away order by surging to the tarmac.

Journalists were also prevented from getting near as the President's remains were being moved from the aircraft to the ambulance.

Earlier, the former First Lady, Turai Yar'Adua and the other members of the Yar'Adua's family arrived at the airport in a presidential jet marked NAF 5N-FGS bearing the seal of the President of the Federal Republic of Nigeria on its tail.

A little boy believed to be her grandson evoked so much emotion when he began to sob uncontrollably.

Shortly after Turai and her family members left the airport, a plane from the presidential fleet landed.

It had on board, the Federal Government delegation led by the Speaker of the House of Representatives, Mr. Dimeji Bankole; the Secretary to the Government of the Federation, Alhaji Yayale Ahmed; and the Minister of Works and Housing, Senator Sanusi Daggash.

At the airport, Yar'Adua's body which was draped in the nation's national colours of green- white- green was taken into a waiting ambulance marked KT21A30 by a coterie of senior military officers led by the Chief of Defence Staff, Air Chief Marshal Paul Dike.

The late former President's remains were received on arrival at the airport by the Emir of Katsina, Alhaji Abdulmumini Usman; Katsina State Governor Ibrahim Shema; and other top functionaries of the state government.

The Prime Minister of Niger, Mohammadu Danda arrived at the airport in a Boeing 737 aircraft marked Republique Du Niger SU-BAG and was received by Governor of Maradi in Niger Republic, Garba Maikido and Shema.

The ambulance bearing Yar'Adua's corpse made a brief stop-over at the Yar'Adua family house located at the Yar'Adua Quarters where the body was taken in for some prayers and preparations before burial.

The body was laid to rest at exactly 5.50pm after final prayers by the Sultan of Sokoto, Alhaji Saad Abubakar.

The new President, who was absent from the burial also did not attend a brief ceremonial parade supervised by the CDS in his honour of the late Yar'Adua.

No official reasons were given for these but two different sources in the Presidency gave different reasons for Jonathan's actions.

While one source claimed that he was advised by the office of the National Security to stay away from the ceremonies because of unfavourable security report, the other said it was due to the strict Islamic nature of the burial.

'We learnt that the National Security Adviser's office advised that His Excellency, Dr. Jonathan should not attend the burial due to security considerations,' the first source explained.

But the second source claimed that Jonathan opted to stay away from the ceremony because the nature of the burial had no role for him to play.

He added that the new President mandated Bankole, a Muslim and the highest ranking public figure to lead the Federal Government team to the burial.

'Jonathan needed to take full control of affairs as President and the Commander-in-Chief of the Armed Forces of the Federal Republic of Nigeria,' he added.

However, the source told one of our correspondents that the President would pay a condolence visit to the Yar'Adua family at a later date.

'It is only a visit after the burial that he will have sufficient time to stay with members of the family and commiserate with them,' the source said.

Before it was confirmed that Bankole would lead the Federal Government delegation to the burial, there were rumours that the President said he would be absent from the burial because no arrangement was made for him to be at the event.