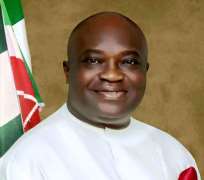 Following Pointblanknews.com expose of a $4million bribe from Oil Baron,

Chief Arthur Eze to Judges, the Appeal Court has reversed an earlier plan

to sack Governor Okezie Ikpeazu of Abia State.
An earlier report by Pointblanknews.com had detailed how Chief Eze,

boasting of his ability to remove the Abia Governor, gave $4million in

lesson” for refusing to take his calls.
The bribe money was routed through the duo of Hon. Adamu Mohammed

Bulkachuwa, a former member of the House of Representative and husband of

the President of the Court of Appeal, Hon. Zainab Bulkachuwa and Justice

was not taken lightly by the Chief Justice of the Federation, Justice

Justice Mohammed, according to our sources had expressed anger over series

of bribery allegations leveled against Judges, vowing to work with the

National Judicial Council, NJC, to sack any Judge found to have

compromised the Judiciary.
“The CJN is not a happy man at this time. He saw that report on the

internet and immediately sent warnings to those involved. He is

corruption, some Judges are sabotaging the efforts,” a senior Director at

from President Mohammadu Buhari who have accused the Judiciary of

colluding with politicians to derail the anti-Corruption fight.

Buhari had accused the Judiciary of slowing down his anti-corruption crusade.

However, in a rare judicial volte-face, the Justice Helen Ogunwumiju-led

five-man bench unanimously agreed in their judgment that Justice Abang

erroneously assumed jurisdiction to hear the motion and adjourned it till

a later date.
Justice Philomina Ekpe, who read the lead judgment, held that what Justice

determination.
She also held that the Justice Abang wrongly interpreted the provisions of

said provisions were only applicable to an interlocutory ruling of the

lower court and when a final judgment in a suit had been delivered.

She also held that Justice Abang lacked jurisdictions to interpret the

provisions of the Court of Appeal being the rules of a superior court.

In her contribution, Justice Ogunwumiju, held that the trial judge

hear the motion when appeal has been entered.
The post How Bribery Scandal Saved Gov. Ikpeazu From Sack; CJN Angry With Judges appeared first on Pointblank News .