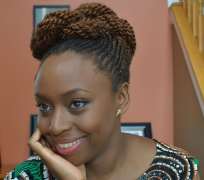 Chimamanda Ngozi Adichie will be delivering a keynote address to the United Nations world body on Friday, August 19, 2016 as part of a series of events marking the occasion of World Humanitarian Day.

A statement from her Manager, Chinaku Onyemelukwe says the event is scheduled to take place in the United Nations General Assembly Hall in New York. Secretary General Ban Ki Moon will be in attendance, in addition to about 1,900 people from the international community.

The theme of the World Humanitarian Day is “One Humanity” and is intended to speak to the fact that our world is confronting massive, unprecedented human suffering.

Ms. Adichie was invited to speak in order to harness her gift of giving voice to diverse stories- to call the world to an increased understanding of our equal humanity in the face of the challenges of a protracted humanitarian crisis.

Ms. Adichie who stroked the world awake to gift as a compelling speaker with her widely acclaimed The Danger of a Single Story speech at the 2009 TED Talk in London has continued to enrich conversations across cultures and continents with her books and topical speeches.

Adichie followed her sterling TED Talk performance up with a riveting outing as the 15th Commonwealth Lecturer in 2012 in London where she spoke on the topic “To Instruct and Delight: a Case for Realist Literature.”

The Nigerian born author of Orange Prize winning Half of a Yellow Sun, a novel on the intimidating horrors of the Biafran War has continued to grab critical attention with her remarkable public speaking skills finally making a dramatic entry into global pop culture when her speech titled “We should all be Feminists” found its way into the popular song “Flawless” by American Diva, Beyonce.

Adichie who has been on tour of the UK this summer to mark the 10th Anniversary of Half of a Yellow Sun also made a well-received speech as the 2015 Welessley College Commencement Speaker.

It would also be remembered that Chimamanda Adichie reclaimed her Anambra roots when she accepted the invitation to deliver the epochal lecture that marked the auspicious 100-Days in Office of the Governor of Anambra State, Chief Willie Obiano in June 2014.

With her invitation to deliver the Keynote Speech at the United Nations on Friday this week, Ms. Adichie has fully established herself a compelling new voice of her generation in the popular imagination.