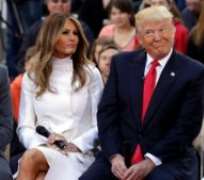 In his effort to reset a presidential campaign that has dangerously gone off track, Republican Donald Trump mistakenly continues to believe there is much to be gained politically by closely linking Democratic frontrunner Hillary Clinton to President Obama's foreign policy record.

Trump last week shocked Republicans and Democrats alike by insisting that Obama was the “founder” of ISIS and that Clinton, his former secretary of state, was the “cofounder” because of their badly flawed policies in Iraq and Syria that led to the rise of the bloody terrorist group.

He tempered his comments during a major national security and anti-terrorism address in Youngstown, Ohio, on Monday but still lumped the two together in sharply criticizing Democratic foreign policy over the past seven and a half years. Citing a long litany of tragic and disastrous developments in the Middle East and Libya, Trump insisted that Obama and Clinton were responsible for all of them.

“In short, the Obama-Clinton foreign policy has unleashed ISIS, destabilized the Middle East, and put the nation of Iran – which chants 'Death to America' – in a dominant position of regional power and, in fact, aspiring to be a dominant world power,” Trump declared.

“Our current strategy of nation-building and regime change is a proven failure,” he added. “We have created the vacuums that allow terrorists to grow and thrive.”

Trump's campaign strategy appears badly flawed, and his insistence on taking on an increasingly popular two-term Democratic president as well as his Democratic rival appears to be working to Clinton's advantage.

A new Gallup survey released yesterday showed 48 percent of Americans say they approve of Obama's handling of foreign affairs. That is up substantially from the president's 39 percent rating in February.

As voters struggle to choose between two major presidential candidates with remarkably high negative ratings on trust and honesty – Trump and Clinton — Obama is enjoying a revival of public approval in the waning months of his administration.

While Trump and other GOP leaders regularly ridicule Obama's foreign policy and anti-terrorists strategies, his latest Gallup rating on foreign policy is his highest since the 49 percent he registered in November 2012, just days before he won a second term against Republican Mitt Romney.

“Americans' highest ratings of his performance on key issues reflect neither personal nor historical highs, but they do compare favorably with his ratings on these issues over the past seven-and-a-half years,” Gallup said in its analysis. “His approval ratings on the economy and foreign affairs currently rank above the best since his first term.”

Although Clinton and Obama haven't always seen eye to eye, the former secretary of state wisely tied her fortunes to the president's popularity during her difficult primary battle earlier this year against liberal Sen. Bernie Sanders of Vermont.

She was most politically vulnerable on a number of issues, including her 2002 Senate vote to support the invasion of Iraq; her conduct as secretary of state in the 2012 terrorist attacks against a U.S. diplomatic outpost in Benghazi, Libya; and her gross mishandling of thousands of highly sensitive State Department email that might have resulted in a national security breach.

For better or worse, Obama and Clinton have been joined at the hip throughout the 2016 presidential campaign, as they sought to retain Democratic control of the White House and to preserve the Obama administration legacy. Trump has sought to use this Democratic alliance to his benefit, but so far, it hasn't worked at all.

While Trump does better in many polls than Clinton on some issues, including bolstering the economy and fighting terrorists, she and Obama stand above Trump on conducting foreign policy.

Nearly six in 10 registered voters say they trust Clinton more than Trump on foreign policy, 59 percent to 36 percent, according to a recent CNN/ORC International poll. That's a 23-percentage-point lead for Clinton, and it contrasts sharply with her meager five point lead over Trump in mid- July, 50 percent to 45 percent.

This vast improvement in Clinton's approval rating on foreign policy – and more importantly, her surge in the national polls — coincides with a concerted effort by her, Obama and vice president Joe Biden to portray the billionaire businessman as an ignoramus on foreign policy and a danger to the country and the world.

“Obama’s approval ratings have risen in every category and his overall rating is above 50 percent, which is good news for Clinton,” said University of Virginia political scientist Larry J. Sabato in an email. “Trump has no choice but to attack Obama at what Trump perceives are the president’s weak points. Trump is struggling and he has to hope conditions change.