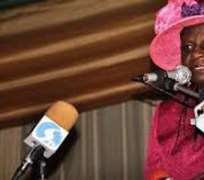 THE Federal Government has commenced weeding out some irregular recruits employed into the Federal Civil Service (FCS) through unauthorised appointments in the last few years.

Chairman, Federal Civil Service Commission (FCSC), Mrs Joan Ayo, who made this known, said the ongoing staff audit by the commission, had revealed some irregular and unauthorised appointments, which, had been declared null and void

A statement by the Assistant Director, Press and Public Relations, Dr Joel Oruche, on Sunday, in Abuja, said Ayo disclosed this in  a  goodwill message at the 2016 Public Service Week,  held  in Abuja, recently.

She said the staff auditing was aimed at  fishing out irregular appointees and delisting them from the Integrated Personnel Payroll Information System (IPPIS).

The FCSC chairman said  the action was necessary because the appointments were not properly backed by any vacancy from the Office of the Head of Civil Service of the Federation  (OHCSF) and, as such, were not budgeted for.

Ayo added that the appointments were also in gross violation of the federal character principle.

She, however,  said  that declared vacancies from  the  OHCSF would soon be advertised.

She assured all qualified Nigerian  youths  who, prima facie, qualify that they would be given the opportunity to compete for the limited but available jobs; while selection would be strictly based on merit within the context of principle of federal character.

This, she said, was subject to meeting certain standards such as prescribed minimum educational qualifications, satisfactory performance in the qualifying examination and (or) at interviews, among others,  without prejudice to the principle of federal character.

She  said  the FCSC would ensure that promotion and discipline were  reviewed to meet the increasing demand of   the  time.

She disclosed that procedure for accelerated promotion had been clearly defined and spelt out in the new revised guidelines to motivate civil servants towards enhanced productivity.

Ayo, who called for attitudinal change among  civil servants, stressed the need for them to imbibe the core values of  the nation's founding fathers.