2016 budget was not padded: Presidency 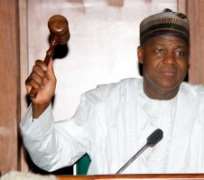 The Presidency on Tuesday said the  2016 budget, which President Muhammadu Buhari signed into law, was not padded.

They told the party leaders that they were at the headquarters to make the Presidency's position on the matter known.

But members of the Transparency Group, a group of lawmakers backing the former Chairman, House Committee on Appropriation, Abdulmumin Jibrin, faulted the Presidency, insisting that the allegation of padding should be investigated.

Jibrin had accused the Speaker, Yakubu Dogara, and some officers of the House of padding the 2016 budget.

The APC had intervened in the matter last week, as its leadership separately met with Dogara and Jibrin. The efforts, however, failed.

Enang, while addressing journalists after the meeting on Tuesday, said, “I am here on the invitation of the APC leadership with my colleague (Kawu) to answer questions on the 2016 Appropriation Act.

“We have given explanation on every issue. There is nothing, to our knowledge, like padding of the budget. The budget, as assented to by the President, is the budget passed by the National Assembly and it is being executed.

“For now, the party is handling it as a domestic issue; a party issue. All of us have been told not to make public comments because the matter is still under consideration.

“We will not want to go into the details so that we will not breach the party's directive or pre-empt the outcome of the party's probe.''

He said, “I will say we came here as persons who work as liaison officers on the budget. The party wanted us to make clarifications and we have made those clarifications.

“We will not draw any conclusion. Please, let us not go too far by mentioning any office. Let it be that two of us have appeared before the party.”

When asked again if the Presidency's denial of the padding of the budget had dismissed Jibrin's allegation, Enang stated that there was nothing like padding in the legislature.

He said the legislature had the constitutional duty to amend the Appropriation Bill sent to it by the President.

“So, what the legislature passes becomes the Appropriation Act upon assent. Therefore, any word which has yet to crystallise in legislative lexicon, you cannot hear us mention it.”

One of the members, Baballe Bashir, told The PUNCH that the zonal intervention projects of lawmakers had exposed the “rot” in budgeting process in the country.

Bashir said the budget was for the nation and not an “avenue for a few persons to allocate huge resources to their areas to the exclusion of other areas simply because they are principal officers.”

He added, “With his vast experience as a former parliamentarian, what Enang should do is to advise the President to clean up the country's budgetary process.

“This is not just about whether there is padding or not. Our budgeting process has problems that must be addressed. So, let him advise the President appropriately, looking at the allegations raised by Jibrin.”

The group stated that it members were not working for Jibrin, but only found his allegations to be in tandem with the fight the group started in June.

Another member of the group, Mr. Musa Soba, expressed surprise over Enang's comments.

He stated, “He must have been misquoted. We still feel there is enough evidence to warrant an investigation.”

I stand by my demand for probe
– Jibrin
In a statement on Tuesday, Jibrin repeated his allegations against Dogara and other officers, saying he stood by his demand for their probe.

The statement read in part, “…Now that I have exposed the fact that Speaker Dogara and the three others have padded the budget, padding is no longer an offence. Shame!

Meanwhile, the secretariat of the House Committee on Appropriation, which was shut 10 days ago by the Department of State Services, remained closed on Tuesday.

EFCC grills Jibrin, to invite Dogara
The Economic and Financial Crimes Commission on Tuesday grilled Jibrin as part of investigation into the budget padding allegations.

It was learnt that Jibrin spent over five hours at the EFCC office, explaining to investigators how the 2016 budget was allegedly padded by Dogara; the Deputy Speaker, Yusuff Lasun; the Chief Whip, Alhassan Ado-Doguwa; the Minority Leader, Leo Ogor, and nine others.

An EFCC operative, who confirmed Jibrin's visit, said, “Jibrin came to our office to honour an invitation. His petition was voluminous and we needed clarification. He submitted more documents before leaving. We told him that we could call him again at any time.

“Based on the allegations and documents he submitted, we will invite other lawmakers, especially Dogara, and members of the appropriations committee.”