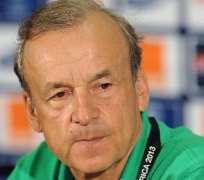 The Nigeria Football Federation (NFF) has announced that German Gernot Rohr has signed a two-year deal to work as a technical adviser.

The 63-year-old ex-Gabon, Niger and Burkina Faso coach will be assisted by Salisu Yusuf, who was appointed as chief coach last month.

'The committee was impressed with Mr. Rohr's profile and current activities for the German Football Federation (DFB),' Vice chairman of the committee said after the recommendation.

'He was very positive, showed great interest in the job and is ready and willing to live in Nigeria. He is also willing to work with indigenous Nigerian coaches and with the committee, and believes the Super Eagles can qualify for the 2018 Fifa World Cup, which is very important to the NFF.

'He swayed the committee with his calmness, good knowledge of the African terrain, focus and maturity.'

Sunday Oliseh was the Super Eagles' last permanent coach before he quit in February in a row over his contract.

Rohr, who has been working on development programmes for the German football association (DFB) since December, played at Bayern Munich and Girondins Bordeaux.

He then coached Bordeaux when they lost to Bayern in the 1996 UEFA Cup final and last worked in Africa as Burkina Faso coach before joining the DFB.

His other past managerial jobs include French club Nantes and Nice, Young Boys Berne in Switzerland, the Tunisian club Etoile du Sahel and the national teams of Gabon and Niger.

Rohr took Gabon to the quarter-finals of the 2012 Nations Cup on home soil and also managed Niger at the 2013 edition but failed to get them out of the group stage.

Before leaving Burkina Faso, he led the Stallions into the final round of the 2018 World Cup qualifiers.

The NFF had confirmed Salisu Yusuf as the national team's chief coach in July.

Nigeria have failed to qualify for the 2017 Africa Cup of Nations finals in Gabon, but are in the final round of qualifying for the 2018 World Cup in Russia.

They have been drawn in Group B where they will face Algeria, the top-ranked side in Africa, Cameroon, as well as Zambia.