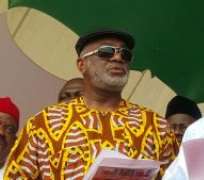 The meeting of the leadership of the Peoples Democratic Party (PDP) South-West zone held on Monday in Akure, Ondo State capital to pick a consensus candidate among those running for the office of the national chairman of the party was deadlocked.

The leaders however, set up a six man re-conciliatory committee headed by Alhaji Yekeen Adeojo, which was mandated to speak with all the aspirants jostling for the National chairmanship post of the party.

Speaking to journalists after the meeting, the Deputy National Chairman, South-West, Dr. Eddy Olafeso, disclosed that the leaders of the party from the six states in the region zoned the Chairmanship position to Lagos/Ogun, Treasurer to Ondo/Ekiti while the National Deputy Publicity Secretary to Oyo/Osun.

“As of this moment leaders zoned the chairmanship of the party to Lagos and Ogun state, and we have been mandated a six man committee of reconciliation to speak with everybody so that the South-West zone will have a common focus at the convention coming up in Port Harcourt.

“We have zoned equally the Treasurer to Ekiti and Ondo axis while Osun and Oyo will  pick the National Publicity Secretary of the party.

“The key issue is the unity among our leaders and the teeming followers of the PDP, in view of very difficult situation and for us to provide quality opposition to the APC government at the centre and to ensure that Nigerians are not schemed out.

“Subsequently you will be hearing from us as we continue to ensure that the Yoruba race are united in the Federal Republic of Nigeria. Our concern at the moment is to ensure peace and unity and come out with a candidate at the national convention in Port Harcourt.”

Olafeso however assured that the leaders of PDP from the zone will come out strong to speak in one voice and to reposition the party in the south west region.

Former Minster for Youths and Sports, Taoheed Adedoja, however, expressed displeasure over the outcome of the meeting and disclosed his intention to contest for the chairmanship position despite the decision of the leaders to zone it to Lagos and Ogun state.

Adedoja, who kicked against the decision said every aspirants should be left to test his popularity and should not be zoned to any particular state of the region.

Similarly, former Minister of Education, Professor Tunde Adeniran also expressed his desire to contest the election saying he has obtained forms at the National Secretariat of the party.

His media aide, Mr. Taiwo Akeju, told newsmen that his principal obtained his form on Monday, in Abuja and intentionally avoided the meeting to consult with some party leaders in the North for the realisation of his aspiration.

Akeju, who is the former Secretary of the party in the zone, protested that all the aspirants should be allowed to test their popularity rather than the consensus arrangement reached by the meeting convoked by Governor Mimiko and his Ekiti counterpart.

He said, “What we are saying is that they should allow all the aspirants that have obtained the forms to go and test their popularity, that is democracy. We don't want impunity again in the party like before.”

He specifically said that he would not accede to the arrangement, lamenting the impunity in the party which he pointed out has been the crux of their calamities.

“We are still battling with the Sheriff thing now, we know the consequences and we know the people that brought us to this level. But what we are saying is that we need to turn a new leaf. Let anybody that purchased form be allowed to contest.

Akeju noted that there are a lot of factions in the South West and confirmed that Buruji stormed out of the meeting to announce his own candidate on Thursday, blaming the woes of the party on its new members.

“We are the founding fathers of the party, I was the spokesman of this party in 1999. These people that are destroying this party were not with us in 1998/1999. We don't want anybody to zone it, we must be democratic,” he insisted.

However, there was a mild drama at the venue of the meeting as the Senator representing Ogun East Senatorial district, Senator Buruji Kashamu stormed  out of the meeting convened by the Ondo State governor, Dr Olusegun Mimiko.

It was gathered that Kashamu came to the venue of the meeting with his supporters who came in three buses but were not accredited for the meeting because the convener of the meeting requested for two delegates from each state.

A leader of the party in the region however, said the matter has been resolved by the Ondo State governor, Mimiko, who called to appeal to the lawmaker.

The ousted Zonal executives of the party in the region also said the meeting of the leaders was not constitutional saying the executive should preside over such meeting.

Speaking on behalf of the executive, Makanjuola Ogundipe, said the National Caretaker Committee led by Alhaji Ahmed Markafi should not hearken to whatever decision reached at the meeting convened by Mimiko.

Ogundipe described the action of the conveners of the meeting as executive rascality as he and members of his executive were the legally recognised executive of the party at the zone.

According to him, the zonal leadership led by Mimiko should be brought to book as they have violated the constitution of the party by excluding critical stakeholders of the party from the meeting.

He said “it is in our opinion that these people must be brought to book, otherwise this kind of executive rascality cannot be allowed to stand in our party if we are talking of winning election in 2019.

“In a situation I have been deprived of taking charge, I am hereby calling on our National Caretaker Chairman to ignore whatever decision they might have taken because that will not hold. What they have done today is a clear violation of our party constitution and absolute power corrupt absolutely.

However, the meeting which was convened by Governor Mimiko of Ondo State, Governor Ayodele Fayose of Ekiti State, was attended by Senator Iyiola Omisoore, Dr Eddy Olafeso and members of the zonal executive and convened at an hotel in Akure, the Ondo State capital.

Others at the meeting held at the Banquet Hall of the Governor's office were Teslim Folarin, Chief Bode George, Professor Taoheed Adedoja, Erelu Olusola Obada, Chief Ebenezer Babatope, Alhaji Lasisi Oluboyo and others.