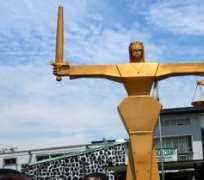 A court in Lagos has reprimanded a housewife, Glory Justice on Monday for allegedly killing her co-tenant (a man) with a rake as ruled by an Ebute Meta Chief Magistrates' Court, Lagos.

Justice, who as reliably gathered, lives at Olodi-Apapa, Lagos, is standing trial for murder.

The Magistrate, Mrs M.O. Olajuwon, ordered that the accused should be remanded at Ikoyi Prisons pending advice from the State Director of Public Prosecutions (DPP).

The Prosecutor, Inspector Julius Babatope told the court that the offence was committed on July 8 at the residence of the accused.

According to him, Justice had used a rake to hit the deceased, Sunday Agadima, 42, on the head and that he later died.

“The deceased had only instructed the accused to make sure she disposed off the waste she was gathering with the rake.

“Unknown to him, Justice was angry that he did not mind his business …she came after him and knocked him dead with the rake,'' he said.

The offence contravened Section 221 of the Criminal Law of Lagos State, 2011 which prescribes death sentence for offenders. The magistrate adjourned the case to Oct. 20.