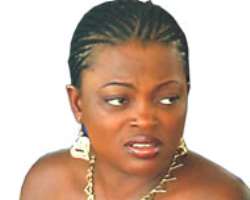 Those who still hope to see Dapo Oyebanji (D'banj) as the lead act in Funke Akindele's highly anticipated movie, Return of Jenifa should forget it. SBN gathered that his foot-dragging slowed down Funke Akindele's crew and he has been dropped.

What we hear from the grapevine is that the script has been written to exclude D'banj and rooms have been created to accommodate other stars who will be having cameo appearances and Dare Art Alade is one of the stars slated for a role.

Speaking to SBN, Funke confirmed that D'banj is no longer part of her plan without shedding more light and she also disclosed that she is going on location to shoot what looks like her first English movie (as a producer).

Accordingly, she will be hitting location with Susan Peters and Gentle Jack to shoot The Ransom, a Yoruba and English movie and she will then commence shooting of Daso Funjo, a dance drama movie where she will be dancing bata . “I've commenced lessons on bata for the movie”, she disclosed. After these two movies she will commence shooting Return of Jenifa.