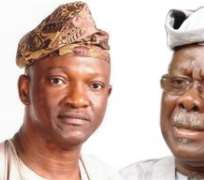 Governors of the Peoples Democratic Party are said to be sharply divided on whether to support Chief Bode George or Mr. Jimi Agbaje for the position of the national chairman of the party, investigations by our correspondent have revealed.

George, who is believed to be the political godfather of Agbaje, had paid the mandatory N1m and had therefore picked his Expression of Interest form at the party's temporary headquarters in Abuja on Thursday. 1

Agabaje, who was the governorship candidate of the party in Lagos during the last election, has yet to pay for his nomination form.

However, a source close to him said that the pharmacist-turned politician would pick his nomination form on Tuesday (tomorrow) in Abuja.

“I can confirm and confide in you that he will pay and pick his form in Abuja on Tuesday,” the source added.

He was said to be the candidate of Bode George during the election, which the PDP lost to the incumbent Governor of Lagos State, Mr. Akinwunmi Ambode.

Ambode was the candidate of the All Progressives Congress.

It was gathered that some of the governors argued in favour of having someone who had never held any position in the party as its next national chairman.

A governor from the southern part of the country, who spoke on condition of anonymity with our correspondent on Sunday, said that the party needed a new face, who he said would be respected by all factions within the party.

“We need someone who is not used to the politics at the national level and who will be acceptable to the other faction of the party. That's why we are thinking about Agbaje,” the governor said.

He also said that such a person must not be seen to have political ambition in 2019.

“We don't need someone who will be scheming to be picked as the running mate to our presidential  candidate who will be coming from the North,” the governor added.

However, it was gathered that some other governors, especially from the North and about two from the South, were said to have argued in favour of Bode George because of his experience.

The former military governor of old Ondo State, was a former deputy national chairman of the party.

Some of his supporters were said to be arguing that he remained the best candidate for the job from the South-West, where the position had been zoned to by the leaders of the party from the South.

A member of the Board of Trustees of the party, Chief Ebenezer Babatope, told our correspondent in an interview on Sunday, that the meeting of the leaders of the party from the South-West slated for Akure on Monday (today), would determine who the caucus would support.

The meeting, which is being hosted by the Governor of Ondo State, Dr. Olusegun Mimiko, is expected to be attended by his Ekiti State counterpart, Mr. Ayodele Fayose, and other leaders of the party from the zone.

The views of the governors, it was gathered, would have a great impact on who would get the support of the caucus.

Babatope said that the Akure meeting would attempt at getting a consensus candidate among the chairmanship aspirants.

He said anyone who was not satisfied with the decision of the meeting was free to go to the national convention in Port Harcourt, Rivers State, on August 17.

It was learnt that both Mimiko and Fayose would later brief other 10 governors of the party on the decisions reached at the meeting.

One of the candidates, George, said he was not against the idea of a consensus candidate, promising to abide by the decision of members of the party at the meeting.

Adeniran, however, differed with Bode George on the issue of consensus, saying that each aspirant must be allowed to go and test his popularity at the convention ground.

He told our correspondent on the telephone, that he joined the race to serve the party and not to be served, adding that his ambition was not a do or die one.

He said, “It is not a matter of life and death. There's season for everything. If the people decide on who they want as their national chairman, I will agree. They know what they want. I will abide by their decision.

“The other zones are bringing in season administrators to run the party and we, the pacesetters, shouldn't come with our second eleven.”

Adeniran, however, differed with Bode George on the issue of consensus, saying that each aspirant must be allowed to go and test his popularity at the convention ground.

The former minister, who spoke through his aide, Mr. Taiwo Akeju, said that even if the office of the national chairman was zoned to Ekiti State, other aspirants must be allowed to contest with himself.

He said, “Democracy is about number. Moreover, the national chairman of the PDP is not going to serve the people of South-West alone.

“The idea of consensus is even late because two aspirants have already collected their forms and we are picking our own in Abuja on Monday as well.”

Apart from George, another chairmanship aspirant who has collected the form was Chief Raymond Dokpesi.

The business mogul, who hails from Edo State, has defied the zoning arrangement, by being the only aspirants out of the South-West, to pay for nomination form.

Though he said that the idea of consensus was possible, Dokpesi however told our correspondent that it was not desirable.

He said he had received endorsement of many states since he began his nationwide campaign for the position.

Culled from The Punch