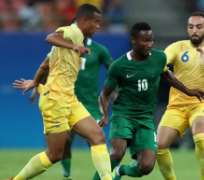 Nigeria U23 team popularly called the Dream Team IV by Nigerians in the early hours of  Monday  defeated their Swedish counterpart  to seal qualification to the quarter-final of the Olympic football event.

Sadiq Umar’s first half strike was all the Dream Team needed to earn a place in the knockout phase of the competition.

The defeat of the Swedes is coming two days after the Samson Siasia-tutored team beat their Japanese counterparts 5-4.

With this vctory, the Dream Team have qualified for the quater-final with a game in hand.

Other teams in the group were still with one point or none as at the end of the game against Sweden.

Siasia's men showed a vast improvement over their performance versus Japan in the encounter against the European Champions at the Arena Amazonia, Manaus.

The Dream Team outclassed the European opponents in every department throwing several goal scoring chances. They were sharper than in their 5-4 win against Japan in the first group game and this latest win sees them consolidate on their top position with 6 points from two games.

Oghenekaro Etebo, Mikel Obi, Stanley Amuzie and Sadiq Umar all came close at different points to either take the lead or extend it.

However, it was the connection between Amuzie and Umar that will eventually pay off for the Dream Team.

The 19-year-old AS Roma youngster was in the right place to plant a header to an inch perfect cross from the defender and send the Europeans crest fallen into the break. It was a nervy match for both teams with several flash points when both teams played end to end stuff, but in all it was the team now famed for their quick recovery before they faced Japan in their opening match with only 5 hours before kick off.

Nigeria are past winners and runner-up of the Olympic Gold in Men's. In 1996 where Bonfrere led the team to Gold they played against several big name footballing teams. And in 2008, Beijing presented the present Coach, Samson Siasia with a place in the final but he team finished second.

Now that the Dream Team have confirmed their place in the quarter final, the Coach can be hopeful to take the team a step further than a silver place finish this time around.