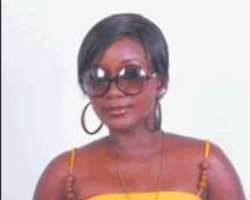 Amanda Ebieye is living her dream as a model and an actress. She started first as a model in Benin, but when her job brought her to Lagos, she had an opportunity to act in a movie – Weeping Tiger in 2007, and that was the launching pad for her acting career. In this interview she talks of her kind of man, and what people don't know about her. RONKE KEHINDE and ODUNAYO OREYENI met her.

What was your childhood dream?
I have always dreamt of being an actress. It has always been my dream. That was what I've always wanted to do. I started as a model. I did a couple of jobs for Calypso crane, a lot of companies before I started going for auditions. I did my first job, actually it was in Weeping Tiger movie and that was the first role I got. It was a mere first film, but it was like an eye opener for me. I got to learn a lot. I did other jobs, very funny jobs like Images; but they were all stepping stones for me, so that was how I started.

What year did you start?

I started out in 2007, so it's three years now that I've been in the industry.

How did you get involved in the T.V series, 'Clinic Matters'?

I have worked with Poligrie before. We did 'Extended Family' together, and that was Bobby production. When I was about to start Clinic Matters, that was mid last year, he gave me a call and I showed him a couple of scripts I did, and that was how we started working.

Which of your works would you say is challenging?

I will say the work I just went to shoot in Ghana is quite a bit challenging; that's 'Tribe'. We just finished it and it was very challenging because I have never suffered so much in a production before, it was tedious. Though it was a fantastic role, I had to shoot bow and arrow. I had to ride a horse, I had to fight, and it was something that is out of this world. I have not done it before, that was just my enjoyment and it allowed me keep fit, because I had to be fit, I had to lose a lot of weight. I think that was my most challenging role.

Who influenced you in this industry?

Well in this particular industry, I will say for Nigerian actors, I have a lot of people that inspired me and Richard Mofe-Damijo is number one. I love Genevieve Nnaji, I love Bimbo Akintola, I love Funlola Aofiyebi, those four people, I will say I learned and I picked from. Anytime I sit down in front of the screen, I just watched them so that I could learn one or two things. Those are the ones that inspired me in Nigeria. Outside Nigeria, I look up to people like Robby Bogon Charleston Ron; those are the actresses I look up to. I love Jenny Deb and Davis Scrimach too, and those are the four people I really admired. I admired Davis Scrimach for comedy; they call me too for comedy because I think I have the comic side of me, so those people for comedy, the other for serious roles, so I have people everywhere.

Give us your family and educational background?

I am from the family of Engineer and Mrs. Ebieye. I have four other siblings, and actually we are five in my family, four girls and one boy. I studied International studies and diplomacy at Benson Idahosa University, Benin and I grew up in Benin.

What brought you to Lagos?

I told you I was modelling, so my modelling agent had made me to leave Benin because I have a lot of jobs I was coming here to do. I did a lot of jobs like photos, billboards for U.B.A, Unity Bank, so I had to move over to Lagos to do those jobs and that was how I just got stuck when I started acting.

Have you ever had any embarrassing moment with your fans?

I can't say it's really very embarrassing, but you know when you walk sometimes, people will say 'oh, you mouthing us, you are like that, and I will say I'm just playing my role and that's nothing. I don't really have anything embarrassing, because people make me feel good anyway. I've had people, who had very terrible encounters with fans, but my encounters with fans have been very pleasant for me. They've always been very warm towards me.

What is your biggest achievement so far?

The day I will never forget was the day I started acting, the day I got my first role. That was when I was given a role in 'Weeping Tiger'. The series was small, but I was happy I was given a chance to show what I have always wanted to show the world and that was my happiest day in this career.

How did you get the role?

It was an audition, and I didn't know. My friend just called me that they are doing an audition somewhere that we should go and the day was already far spent, when we got there, the audition was already over. The director saw me and then said come! I walked towards him and he said read! And I read, and he was like you have a part. It was unbelievable, because the place was packed with people. It was fantastic and I just couldn't believe it.

They should be expecting a new me and in a different light. I want to be very choosy about what I do, I want to be able to pass across a lot of messages to people, I don't just want to be that person that just 'oh, she's just bad actress'. I want to be the kind of person that people can watch and learn from, pick something from, do different things that people can even say I can do this, because if you are just stereotype, the kind of actress that just sits down and just delivers lines. I'm not really touching people, I should be able to jump the fence, I really want a lot of challenging roles and that is what I'm going to be doing, so my fan should expect something a bit different from the usual Amanda Ebieye, they should expect a whole lot because, I think I'm in action path now. I'm ready to explode.

Do you find your work fulfilling?

Nothing can be so totally fulfilling because even if you indulge in the job, there is one or two things you are not really getting that you want. But so far out of 10, I will give it seven in terms of fulfilment.

Have you ever had any sexual harassment in this job?

That question again (pause for a while), why do journalist always ask we artiste that question, what else do you people want us to say. It's everywhere, in marketing it's there, even in this journalism, I'm sure it's there.

What is your style, are you a fashion freak?

Are you a label freak?

I'm not a label freak; I just go with what is beautiful and what is authentic. It doesn't have to be Christian Dior, but as long as it's just original and beautiful, and it suits me most importantly.

What is your favourite colour?

As an African woman, we should be expecting wedding bells, so when is it coming?

Soon, you will know when it's coming.

Nothing, I'm perfect the way I am.

You've featured in so many soap operas and movies so far, can you name them?

In soap operas I featured in Weeping Tiger, Super Story, Soul Sisters. For movies there is Dangerous Angels that just came out, and My Last Wedding, Tomorrow Must Wait. There are so many of them that I can't remember.

Which one of the movies brought you to the limelight?

I think the one that people are just freaky about now is 'Clinic Matters', I don't know why, but everybody just seems to love that programme. Funny enough, people have always appreciated my works somehow, even from where I felt I wasn't even doing well people will just find it okay.

What qualities are you looking for in your future partner?

I want a God fearing man because we must train our children, a man that can understand me; a man that loves me, a man that cherishes me and appreciate me basically. He must be good looking, because I can't marry an ugly man and a short man because I'm short (laughs). But most importantly, he must have a good character.

What is your phobia?

I don't have a phobia, I can cross anything, and I'm not scared.

What disappoints you most in men?

Men are just men, even when they are so irritating with their life, they are just men. What can we do, that's their make. So I don't think they can get me disappointed anyway, because I'm used to them.

How have you been able to cope with male admirers?

Tell us what people don't know about Amanda Ebieye?

Number one, I am not Nurse Abigail, I'm different, because when I'm not well and I get to the hospital sometimes and everybody in the hospital will just be shouting 'Nurse Abigail what? What did you come to do? Why can't you treat yourself'? I am totally different from her; she is that, I'm me. I cannot complement myself, but mum always tells me and I believe her that 'you are an adorable person, a wonderful person. And I think I have to be strict, I love my job, I love what I'm doing, I just enjoy this work.