I never attacked President Buhari, I only advised him: Rev. Father Mbaka 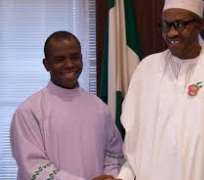 Enugu Catholic priest and Spiritual Director, Adoration Ministry, Enugu State, Rev. Fr. Ejike Mbaka, on Saturday, advised President Muhammadu Buhari not to marginalise any part of the country in the appointments made by his government.

Mbaka was quoted in a statement made available to journalists by his media aide, Maximus Ugwuoke.

In the statement, which was apparently released to counter a media report that the cleric attacked the President in a recent message, Mbaka said that he only advised Buhari.

While refuting the report that he attacked President Buhari, the cleric said he only offered suggestions to the President on how to tackle the current challenges in the country, which he said were caused by the actions and inactions of previous administrations in the country.

The appointments made by President Buhari, so far, are believed to be lopsided and in the favour of the northern part of the country.

Mbaka advised President Buhari to empower those that worked for him during the 2015 presidential election.

The statement partly read, “Fr. Mbaka advised the President to be careful about how he appoints people to prominent positions so that no region would appear marginalised, as it happened in the Nigerian National Petroleum Corporation board and charged the President to make sure that those around him do not mislead him.”

He advised the President on human empowerment and asked him to ensure that those who worked for him (Buhari) during the election ought to be empowered.

“Fr. Mbaka merely reinstated the obvious suffering that Nigerians are facing (which even the President himself had acknowledged and sued for patience and perseverance) and advised the President on the ways to tackle it, that is, by engaging economic gurus and by listening to good advisers.

“For the purpose of clarity, granted that Fr. Mbaka stated the obvious — that there is hunger in the land — he never attributed the cause of the hunger and economic hardship bedevilling the nation to Buhari. Rather, he attributed it to the actions and inactions of the past administrations of this country.”

Mbaka's aide, in a move that suggested an attempt to mend fences between the cleric and the Presidency, added that the message in which Mbaka reportedly attacked Buhari was followed by another one where he blamed former President Goodluck Jonathan and the Peoples Democratic Party for mismanaging the economy.