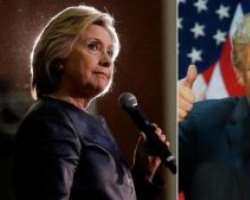 Dismounting her horse she simulated a kill with grace and ease as the bull charged her, driving her point home to rapturous applause. Though she was immediately arrested, the authorities had little choice but to pardon her for her popular display of skill.

Nearly seventy years later at the 2016 Democratic National Convention, Hillary Clinton stood victorious before the nation as the first female Presidential nominee for a major party. But her real measure as a proficient politician lay in just a short few words of  her victory speech , “A man you can bait with a tweet is not a man we can trust with nuclear weapons”. Matador Clinton has now finally realized that Donald Trump can be baited into his own undoing.

And indeed he was. Clinton must have ultimately realized that asking Ghazala and Khizr Khan to speak, the Muslim parents of a slain American war hero, would fire up Trump. Khizr  recounts how their involvement in Clinton's campaign escalated  over months since December- from being asked whether their public comments against Trump could be used in a tribute to their son at the Convention; to later being asked to join it; to finally being asked to give a speech.

This is not to suggest that Clinton had this in mind from the start, rather that by now it's not difficult to see how Trump would react to the Khans' speech once it was confirmed. This had the effect of baiting Trump by offering him the antithesis of his campaign positions, protected by bipartisan American values. In this case, a Muslim family protected by untouchable American patriotism: the red muleta to draw the bull.

The bull charged. Trump  lashed out against the Khans  and consequently suffered his worst three days yet. Lambasted for attacking ordinary, patriotic American citizens, Trump has faced  devastating criticism from within his own Republican party . In seeing only the red, the bull became obsessed with it while the matador stepped deftly aside. As Hemingway describes it, for the “small lure of scarlet cloth” the bull is “not dominated or controlled, his charge is merely taken advantage of”. Channelling Conchita Cintrón, Hillary Clinton finally outmaneuvered Donald Trump.

Clinton will need to continue to use Trump's destructive force against him in the upcoming months, and she will need to bait carefully in the Presidential Debates. But she has proven she can do so quite adeptly. She has a strategy to counter Trump's own ability to twist kernels of the Democratic Party's guilty conscience into offensive attacks.

American politics must be considered a true art form in its own right. In a 1962 letter to J.F Kennedy, liberal public economist John Kenneth Galbraith qualified, “Politics is not the art of the possible. It consists in choosing between the disastrous and the unpalatable”.

The tragedy of this art evokes Ernest Hemingway's Death in the Afternoon published thirty years earlier. For Hemingway, Spanish bullfighting represented the ultimate tragedy played out before aficionados in the public. Unpalatable to some and disastrous for bull, matador or both, bullfighting is a microcosm of the American general election.

Like a great matador, a politician gains the affection of the public, tests and baits the opponent with skill, and wins the charge to its final conclusion. In this arena, Hillary Clinton is finally showing mastery.

Clinton shares her prowess with one of the greatest female bullfighters of all time, Chilean-born Conchita Cintrón- also known as La Diosa Rubia (“The Blonde Goddess”). Like Clinton, Cintrón thwarted the systems that prevented her, as a woman, from rising to the top of her field. In the heat of 1949's Spanish bullfighting season, Cintrón defied both the rule against women competing on foot; and the presidente's order that she not be allowed continue in the arena.

And these have not been trivial. Trump has previously  used Bill Clinton’s infidelity  to undermine Hillary's feminism. He has  called for Russian espionage  against Hillary, the former Secretary of State in the Obama administration that suffered the fallout of the  NSA surveillance scandal . He's  attacked the impartiality of a judge  only for Justice Ruth Bader Ginsburg, a Bill Clinton SCOTUS appointee, to turn around and  attack his candidacy .

Despite this, Clinton's advantage remains that  electoral mathematics favor her . However, she still needs to  win the people’s trust  and pull Republican moderates and independents into her orbit. She will find it difficult to do this without baiting the Trump bull to fracture his support base. Clinton must know this, and after decades in politics leading up to November- she knows it well.

As American director Orson Welles wrote in the introduction to Conchita Cintrón's autobiography, “You can't keep a lady waiting forever, and there came an afternoon where she decided that she'd waited long enough”.

Olé, Hillary.
Bhorat is a political commentator, media and entertainment junkie, and technology futurist residing in Santa Monica, USA. He was one of the recipients of the Rhodes Scholarship for 2012. He has been published in the UK's openDemocracy  as well as South Africa's Business Day Live and can be found on Twitter @bhoraticle.