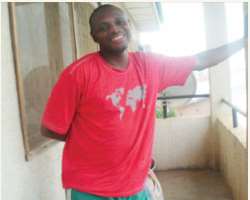 Former Nigeria youth international, Peter Ogaba, has passed away on Friday in the country's capital, Abuja.

The Nigeria Football Federation (NFF) announced the sudden demise of the former under-17 and under-20 star on Friday afternoon and explained that he 'died at his residence in Abuja after a brief illness.'

'We are shocked to hear of the sad demise of former junior international Peter Ogaba. Ogaba was part of the Eaglets at Canada 87.

Ogaba died at his residence in Abuja after a brief illness,' said the NFF in a statement on Friday.

Born on September 24, 1974 in Jos, Plateau State, Ogaba was a member of the Nigerian squad to the FIFA Under-16 World Championship in Canada in 1987.

Two years later, Ogaba was part of the Flying Eagles that featured at the FIFA Under-20 World Cup in Saudi Arabia, where they finished second to Portugal.

He was the youngest member of that squad.
Ogaba became popular when he played at Canada 87 at the age of 13.

He went on to play for Belgium outfit, KSC Lokeren and then Finland's FC Oulu as well as Duisburg in Germany.