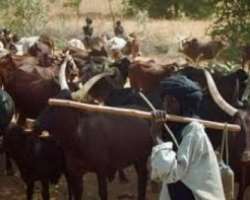 A Pro-democracy Non-Governmental body- HUMAN RIGHTS WRITERS ASSOCIATION OF NIGERIA (HURIWA) has asked President Muhammadu Buhari to take immediate military and intelligence-driven measures to end the ugly specters of armed Fulani killings all across the country.

The call became necessary with the recent spate of attacks of farming communities by armed Fulani herdsmen in Godogodo Southern Kaduna; Adamawa and Benue States with casualties put at nearly one hundred but with no single culprits arrested by the security forces.

The Rights group noted that armed security forces failed to stop these attacks but are always quickly deployed to quell civilian protesters including half nude village women in Godogodo under Jema’a Local government area of Southern Kaduna State. 'This pattern of selective enforcement of the law could spark widespread unrests".

In a release by the National Coordinator Comrade Emmanuel Onwubiko and the National Media Affairs Director Miss Zainab Yusuf, HURIWA said the failure of President Buhari to curtail and contain the incessant killings is hurting the nation’s economy and amounts to grave constitutional breach on his part since he swore by a sacred legally binding oath of office not to allow ethno-religious sentiments influence the enforcement of his official duties.

Besides the Rights group told President to bear in mind that he swore a sacred oath of office to strive to preserve the Fundamental Objectives and Directive Principles of State Policy contained in the Constitution of the Federal Republic of Nigeria and that he will not allow his personal interest to influence his official conduct or his official decisions.

"Mr. President must recall that he told us under a binding oath that he will to the best of his ability preserve, protect and defend the Constitution of the Federal Republic of Nigeria.”

The Rights group argued that the failure of President Buhari’s administration to take decisive, transparent, accountable and forensic measures and actions to stop the killing of farmers and villagers by armed Fulani bandits masquerading as herdsmen has considerable spread the sentiments that his government has decided not to confront the menace because the alleged perpetrators are of same ethno-religious affiliations with him and indeed over 85 percent of the direct military and police Chiefs are of the same ethno-religious configuration with the alleged killer herdsmen.

The Rights group said it was wrong for government to only go after cattle rustlers but to intentionally and loudly allow farming communities to continue to come under increasing and consistent barrage of well coordinated ethnic cleansing and genocide by killer Fulani herdsmen.

“Apart from the obvious fact that the Constitution specifies the protection of lives and property of the citizenry as the primary purpose of government, the dare- devil killings have gravely contributed to the recent classification of over 20 States in Nigeria as unsafe for business even as the United States government bans her citizenry from visiting these areas. These killings by Fulani herdsmen have contributed in setting the economy of Nigeria backwards."

HURIWA recalled that a recent warning from the United States Department of State had stated that: "Security measures in Nigeria remain heightened due to threats posed by extremist groups, and U.S. citizens may encounter police and military checkpoints, additional security, and possible road blocks throughout the country. Hundreds of thousands of Nigerians have been displaced as a result of violence in the north.”

The State Department HURIWA said, noted that kidnappings remained a security concern throughout Nigeria, as criminal elements across the country orchestrated kidnappings for ransom; Islamic extremists, operating predominantly in the North, also have been known to conduct kidnappings. Criminals or militants have abducted foreign nationals, including U.S. citizens, from off-shore and land-based oil facilities, residential compounds, airports, and public roadways.

HURIWA also warned the Nigerian government of the likelihood of groups filing petitions at the International Crimes Court in The Hague against President Buhari for standing by and doing nothing whilst armed hoodlums embark on murderous rampage all over Nigeria under his Presidential watch.

HURIWA said under the Rome Statute which brought into being the global crimes court the government officials who aided and abetted committal of genocide and mass killings are called to render accounts before the International Criminal Court for crimes against humanity.