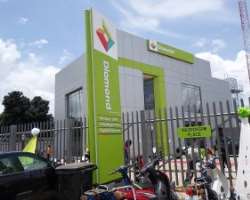 Diamond Bank Plc is considering raising fresh capital and selling some assets in order to strengthen its capital base, its chief executive Uzoma Dozie said on Wednesday.

Dozie said the bank's capital plan will ensure it meets all regulatory requirements both in the short term and in the future. The managing director who was speaking among growing concerns of the safety of many of Nigeria’s lenders, said  Diamond Bank's capital adequacy ratio had fallen to 15.6 percent of assets by mid-year from 18.6 percent a year ago.

Nigerian banks had been sufficiently primed to weather systemic instability with the sector consolidation exercise of 2005 which required each of them to raise capital to a minimum of N25 billion, quite a humongous figure at 20o5 values.

“We are doing a capital management plan and that will determine how much capital we want to raise, tenor and size,” Dozie told an analysts' conference call.

“We don't have any need to grow our branch network any more. We are also looking at some assets that we can dispose of and we are a long way into that,” he said.

Shares in the mid-tier lender, which has fallen 33 percent this year, were up 1.94 percent on Wednesday at 1.58 naira. The share price fell 59 percent last year.

The central bank shored up mid-tier lender Skye Bank this month with a loan and replaced its management after its capital fell below levels required by regulators and has been urging people not to panic about the banking system.

But pressure is building, with loan books – nearly half of them in dollars – hammered by a shrinking economy, a plunging currency and acute foreign exchange shortages in Africa's biggest oil producing nation following the slump in oil prices.

The central bank has told lenders to set aside extra provisions against their dollar loans in the wake of the sharp fall in the naira since it floated the exchange rate in June.

Diamond's non-performing loan ratio rose to 8.9 percent in the first half, above the central bank's target level of 5 percent where it stood a year ago. It expects to bring down the ratio to 7.5 percent by year end, he said.

Diamond last week reported a 26 percent fall in its half-year pretax profit to 10.5 billion naira. Dozie said he expected the bank to make a pretax profit of more than 20 billion naira this year, which will help lift its return on equity to 8.5 percent from 8.1 percent in the first half.