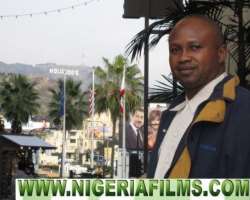 He is currently the National President of the Association of Movie Producers [AMP], but recent developments in the industry suggests that this light skinned movie maker seems not in a good mood at the moment due to the current division in his association.

Paul Obazele has been having sleepless nights because most of the best hands in his association have decamped to form a parallel body known as Association of Nollywood Core Producers (ANCOP).

The new association, we gathered, was born out of the desire to set a new standard for movie makers in the country

Headed by Alex Eyengho, the aim of ANCOP is to redefine the standards of movie production and encourage core professionals in the industry.

“We are tired of what is happening in AMP, so we decided to leave it for Obazele because he has been using thugs to intimidate some of us that are clamouring for a change of leadership. But with ANCOP, we are ready to set a pace,” Eyengho said.

However, when we called Obazele on the issue, he denied knowledge of the existence of a parallel body formed by movie producers. He said his focus is on taking the AMP to the next level.