Yahaya Bello: An Epitome of Transparency 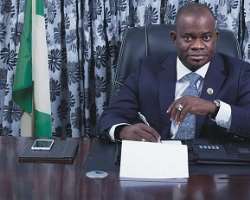 In the many years of my journalism practice, I hold on to the natural opium of justice by fairness. Even the holy books enjoin us to dig into the truth and hold it tenaciously. Therefore, when journalism came up with the theory of balanced reportage, it is only aligning with a universal principle of justice and fairness to all.

I was recently at a gathering where an old man feted us with a riddle with dangling probabilities: If a mad man beats you, would you retaliate? Some said they wouldn’t, so as not to be tagged insane too. Some said they would hit back at the mad man to enliven the consciousness of pain in him. To me, both are correct and wisdom-fat.

Since the inception of the present administration, transparency and accountability have been the bulwark of its bond of trust with the people of the State. For the first time in the history of Kogi State , government came public on her bank accounts and graphic records of income and expenditure. Not out of compulsion but because of her belief in doing what is right.

Governor Yahaya Bello has put in place mechanism for stringent financial management by government to make the people the biggest beneficiaries of government policies. That is why when some insignificant characters tell some lies as faceless as they are, government officials wave it off.

For instance, it is laughable and ludicrous for these faceless characters to insinuate that the present administration collected N18 billion naira as allocations for 6 months whereas, the actual amount that came to the State in that duration was N13, 118, 150, 265.78. Their arithmetic fallacies show they are striving to squeeze truth from falsehood. Which is just ludicrous. Those who seek accountability must as a matter of principle come to the table with verifiable information and facts. Failing to do this renders the exercise carried out as an insult to the intelligence of rational thinkers and people of conscience.

It is also laughable to claim that N20 million is being deducted from the account of each Local Government Area every month and submitted to the office of the Chief of Staff to the Governor. In their confusion, the political desperados failed to tell the world that government has paid six months salaries within six months. The Local Government Councils in the State has accounting officers. The Chief of Staff to the Governor is not one.

Immediately Governor Yahaya Bello was sworn in as Governor, one of his first actions was the abolition of obnoxious deductions from the accounts of Local Government Councils. Local Government Councils now enjoy financial autonomy. The vehicles bought by the Council Administrators were on hire purchase, to be defrayed over a period of time. The idea was to ensure it does not take heavy toll on the finances of the Local Councils. There is no room for fraud under Governor Yahaya Bello.

The pettiness of the allegation that Local Government bank alerts are received by the Chief of Staff is ridiculous. For a blog media

With the dwindling allocations, it has become increasingly difficult for many states to pay salaries. The success of the present administration in securing the bailout fund is an indication of its compliance to due process and the mechanism for transparency.

If the blatant falsehood of the peddlers , it was quoted that contracts were awarded without due process and that the Agasa road project was virtually non-existent. Instead of joining issues with the mercenaries, it is normal to pity their brave ignorance and a badly executed campaign.

Every contract awarded in Kogi State since January 27, 2016 through due process. On the Agasa road, our evaluators have assessed the level of job done and discovered that the contractor has done more work than the funds released.

The lack of facts on the part of the hatchet jobbers also became manifest when they reversed their “no job” claims to “why we pay contractors when we are in court”. We cannot deprive contractors of their legitimate pay just because the Governor is facing tribunal cases. Case or no case, the people of our dear State deserve good roads.

The figures being bandied about concerning a certain account of Government House Admin are reflective of the degenerative state of those behind the allegations.

Why the ferocious lies?
Those making these allegations failed to veil up their insipid intent by exposing their satanic desires. Political exigencies have made it unavoidably necessary they dance naked in the market place by exposing their ignorance.

The intent of the writer is to blackmail the judiciary and justify their ceaseless attack on the temple of justice for standing on what is just.

Like in the trend in the week dovetailing to the judgement at the lower tribunal, the desperate interests are trying to blackmail the judiciary. Who told them judiciary could be bought Those who are trying to change the change have forgotten that we are no more in the Dasuki era when government money became a bazaar. In the era of change under our dynamic anti-graft President, accountability is the hallmark.

We need to ask the detractors how they came to their weird conclusion that Governor Bello is trying to buy the judgement of the Appeal Court. One wonders whether their own attempts at buying justice rebuffed by the judiciary. If this be the case, they should understand that this is not because favorable judgment goes to the highest bidder but simply because our judiciary has been rejuvenated and repositioned as the last hope of the common man. The era of procuring judgement is over. Never shall Nigeria regress back to that time when the judiciary's hands were tied to the back by unjust and arrogant Powers.

In line with the promise of Mr. President to make the judiciary independent, the Nigerian judiciary has been the bastion of hope for the common man and the defender of our democracy. They cannot be blackmailed into deciding against the rule of law.

Let me also say here that for some hitherto respected Blog sites to annihilate investigative journalism by reporting falsehood is pitiable. We imagine how much people are losing their credibility to the need to defend people who are doing everything to extend their political fiefdoms. What we have for them is pity.

It is no more news that the PDP misgoverned this state. They ruled without ideas. They ruled with the sole intent of promoting kleptomania. They ruled without direction. It was no surprise that Governor Yahaya Bello defeated Wada even in his Local Government Area during the supplementary poll. That is the level of rejection, not necessarily of Wada, but the party that drained our nation. We can never go back to those dark days of government irresponsibility.

The streets of Lokoja are waiting for the judgement. The Governor has goodwill on his part despite the politically motivated attacks on his person by people who messed up the system he is now trying to remould into his New Direction agenda.

That votes belonged to political parties is no news. It has precedence. The votes cast on November 21, 2015 belong to the All Progressives Congress. And since election was not concluded as at the time Prince Abubakar Audu died, Faleke was not known to law as a candidate.

The sound judgement by the lower tribunal has no doubt, jolted opponents of the Governor. The fear of losing at the Appellate Tribunal is causing the pedestrian approach of calling the judiciary a bad name to discredit the temple of justice ahead of the judgement.

Governor Yahaya Bello has shown great respect for the judiciary. Apart from upgrading the environment of courts in the State, he has ensured prompt payment of salaries to judiciary staff. Hunger could corrupt a mind.

Today, APC leaders across the entire North Central geo-political zone paid a courtesy call on the Governor, congratulating him for the statesmanship with which he resolved the Assembly crisis, ASUU face-off and recently, the NLC strike.

This is the story of a new Kogi under a New Direction. Faleke cannot be aspiring to rule Kogi from his Reps seat where he is representing Lagos. Aside the legal aberration, it is politically absurd and represent an insult on the people of Kogi State.

Recently ,the Governor called the opinion leaders across the state: party leaders, royal fathers, market women, economic drivers and artisans to open the account books of the State to the public.

We are ahead of our detractors.
The claim by some faceless groups as promoted by discredited blog sites that the State Government is owing six months salaries is laughable and smirks of gross misinformation. The Governor has paid salaries six times in six months.

The Lokoja township roads are wearing a new look while the previous state of insecurity inherited has been tamed with a strong political will.

I have apologized severally for the pains experienced during the staff verification exercise. It was a necessity to sanitize the system. So far, 18000 ghost workers have been discovered with a possibility to discover more. This will save the State about N16 billion naira annually!

Many investors are trooping into the State as the right environment is being created with Ajaokuta and Itakpe ready to herald the diversification revolution of the Nigerian economy. It is going to be better with unity and cooperation.

I have received many calls of raging commentators against the desperation of those who brought Kogi to her knees. We won’t go back to Egypt.

The judiciary is not on trial. What is on trial is the morality of liars.

Thanks and God bless Kogi State.
Fanwo Kingsley is the Chief Press Secretary to the Governor