Celebrating Abudance In The Midst Of Poverty 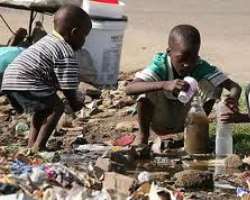 The few of us that live in gross opulence and luxury within each African country where most people suffer in squalor have no conscience unless we give some back. When growing up, we celebrated with the rich for their hard work, blood and sweat. When we saw a beautiful house, we praised the success of their owners, as we were encouraged to struggle and work as hard so that we could achieve the same. In recognition we always said: No there ime Papa born am O!

Cultural adornment, appreciation and acknowledgement used in the past to pay praise singers have been bastardized. It started with sticking money on the celebrant’s and well-wisher heads or dance contests until money-miss-road turned it into hobby at every party to buy fame. They started hiring police to hold cash or follow them while they sprayed money. It has now gone viral with the use of spray guns. There is so much money fingers cannot spray it fast enough.

It must be clearly stated that everyone has the right to spend her money the way he wishes. So if you work hard for it, nobody should grudge your style unless you spite others. Indeed, this writer was once told to change the money he wanted to give into singles and spray celebrant and his wife. This might have saved them the embarrassment that no one sprayed in his video!

Today the rich are no longer respected. Even the hard working ones that made their money pure and clean have become suspects. Indeed, there are classes within the rich. We now have the filthy rich and the poor. Unlike the rich of those days, these nouveau riche are ready to sacrifice human lives including their own to be filthy rich, not just rich. They are so blinded by their own earlier poverty, they are indifferent to excessive aggrandizement to spite the poor.

Lately, we see all types of currencies flooding the dancing area like flakes falling from the sky. The old timers that worked very hard for their money have gone back to the old fashioned way of giving celebrants money in envelops or writing checks so that they would not be confused with looters, drug dealers and 419ners. Actually, many might embarrass themselves competing with spray guns dishing out money faster than it could be printed.

When salaries are not paid, retirees are not paid, hard working and well educated that have played by the rules are left out to beg and suffer; it is not surprising that young and old people resort to unsavory ways to make ends meet. Grandfathers and grandmothers are caught at the airports trying to smuggle drugs out of the country or used as drug courier. There is something fundamental wrong that one administration after the next has become indifferent to.

The amount of illegal and underground cash driving the markets has flooded the economy with increasing price of goods and services beyond the means of average earners. In order to live a comfortable life with regular supply of clean water and alternate electricity modestly, one has to earn more than the average Bobo. It takes more to keep our heads just above water.

Since when have we become beggars in order to eat? We ask politicians to create enabling environment so that every family has enough money and can afford to buy food for every member of their households. Instead, they have turn food into a lottery for the starving poor and dwindling middle class. When it gets to a point where people are stepped on and a few crushed to death just to get a bag of rice, garri or tuber of yam, there is no reason to celebrate.

What is nauseating is that politicians distribute food and essential items freely in order to curry votes and favorable ratings from those that are willing to subject themselves to their whims and caprices as being kind, generous and graceful. We encourage more of them to take us for granted. It is hard to believe that we have to be starved almost to death before we differentiate the devils from the lesser devils. Won fi owo Abu fi se Abu la lejo.

They take a tiny little bit out of the money they stole from us to placard the novice, naïve and the desperate ones among us. They have mansions and luxury cars in every major city of the world, from what they padded in the contracts, budgets, fathom salaries of ghost workers and outright looting even when our politicians are the highest paid in the world. The governors have turned local governments into their subsidiary piggy banks.

Any reasonable observer would expect this is what would ache people in individual African countries and a good reason to set up special courts to try and jail these vagabonds. We are more willing to tolerate looters and find excuses under democracy, the rule of law and order. Even when they are tried and convicted, crocks have supporters wondering why them and not others. So if police cannot flag down everyone speeding on the road, no one must be punished.

While there are valid cases of abuse and selective prosecution, the best way to make sure every dog has its day is to change one government after the next. It is the only way we can have crooks probing and punishing crooks. This is how it is usually done in countries we emulate so much with parties of different ideologies and principles.

There is every reason to turn against those who turn us into hungry man, women and children by looting the treasury dry. People want meat in every pot, garri in every bowl and clean water to drink rather than stay on the line for the mercy of their politicians using our money as hand- outs for problems they intentionally created for people that are not lame, blind or deaf.

We are so engrossed in ethnic baiting, every disagreement flare up into violence. Yet others are calling for civil and ethnic wars. If a country has not gone through civil war before, that country could learn from those that had. Those that had civil war are calling for more. Separation into countries has not cured border fights in Sudan, Somalia or Rwanda.