IPOB blasts MEND: You don't have our mandate to negotiate Kanu's release 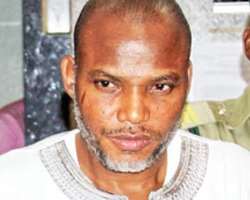 The Indigenous People of Biafra (IPOB) said the Movement for the Emancipation of the Niger Delta (MEND) did not have its mandate to negotiate the release of Mr. Nnamdi Kanu and other members.

IPOB described the purported negotiation between MEND and the Federal Government as a 'kangaroo agreement and a jamboree.'

A statement from the Media and Publicity Secretary of IPOB, Mr. Emma Powerful said the group only accepted the unconditional release of its leaders, insisting that  only Kanu can negotiate on behalf of the group.

The group vowed not to renounce the struggle for the restoration of Biafra state.

The group continued: 'MEND is a group which does not know what it is looking for and who decided to stay and use the plights of their people to make demand from the  Federal Government, everybody knows that and Nnamdi Kanu is not the type who will sabotage the people of Biafra.

'Therefore, any group or individual that wants to use the struggle for Biafra to make money or to sabotage the independent state of Biafra will die with serious pains around him or her because this is God's project which no human being can stop because it is a spirit that hovers around'. - The Sun.