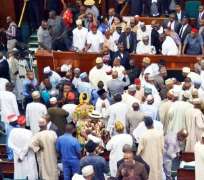 The Nigeria Police, on Tuesday, commenced full investigation into the padding of 2016 budget as alleged by the former chairman, House Committee on Appropriation, Abdulmumin Jibrin.

Jibrin had, on Monday, submitted a petition to the acting Inspector-General of Police, Ibrahim Idris, indicting the Speaker of the House of Representatives, Yakubu Dogara and 13 members of the House.

An Assistant Inspector-General of Police is heading the crack team of investigators.

Jibrin was seen at the Force Headquarters on Monday. with his team of lawyers making his statement before the investigating team.

An informed police source revealed authoritatively that the investigation was going on fine and that whenever he is needed, he will be invited.

According to the source, Jibrin spent over two hours with the investigating team before he left the Force Headquarters.

The informed source said they were making headway into the case as Jibrin had finally realised that it was the police that had the constitutional powers to investigate such cases.

The source added that Jibrin had made useful statement and was cooperating with the police and very soon, the principal officers of the House would be invited.

Meanwhile, the All Progressives Congress (APC) national officers from the North, on Tuesday, grilled the former chairman of the House of Representatives' Committee on Appropriation, Honourable Abdulmumin Jibrin for about four hours behind closed doors.

The meeting was held at the party's National Headquarters in Abuja.

The lawmaker who arrived at the party's National Secretariat around 2.00 p.m. in a white flowing agbada and white cap, was escorted by security operatives.

After the closed-door session, Senator Shuaibu confirmed to newsmen that the lawmaker was summoned 'in respect of what is going on in the House of Representatives, which you people know more than all of us.'

He noted that the summon was for Honourable Jibrin 'to come and brief the party,' stressing that 'honestly speaking, we never thought it would be covered by the media.'

Speaking further, Senator Shuaibu added that we 'summoned him, the National Secretary of the party and the National Vice Chairman of his zone to sit to discuss; there is nothing like passing any judgment on any member of the party. We only played our role as the umpire in this matter, to see how we can create some atmosphere of peace and unity among our members.

'I was reading today in your paper that we called him to discipline him; discipline him over what? Whatever happens in the House of Representatives or the Senate under the constitution and their rules they are immune.

'But when certain things go (happen) of course, the party needs to call its members to know how best to unite any feuding members and that is exactly what we did.

'What we did actually was that we heard from him. We have heard earlier from the Speaker, but because it was not in the newspapers, like you just went and published nobody knew we held a meeting with the Speaker.

'I want to say what we discussed honestly speaking, was to get a better brief, because we have to be carried along.

'They are our members, we should know from them directly what is really going on, so that we can see how we can handle the situation without necessary making it a town square dance.

'We are discussing with them and it is an ongoing consultation, we are not done with them, we sat with the Speaker, we just finished sitting with him and we would continue to sit with him,' he stated.

On his part, Honourable Jibrin said 'I am here on the invitation of our great party, the APC we discussed extensively on the crisis in the House of Representatives.

In a related development, Elder statesman and Ijaw national leader, Chief Edwin Clark, on Tuesday, came down heavily on members of the National Assembly, describing the alleged budgeting padding as sacrilegious.

Clark, who also described them as insensitive to the plight of Nigerians with their ostentatious lifestyle, expressed confidence in the anti-corruption posture of President Mohammadu Buhari.

The elder statesman urged Nigerians to rally round the anti-corruption efforts of the President.

Chief Clark made this known while receiving the management team of Edwin Clark University (ECU), Kiagbodo in Delta State, led by its vice chancellor, Professor Timothy Olagbemiro, at his Warri residence.

The Ijaw leader wondered why legislators, who were saddled with the responsibility of making laws will now turn around to insert extraneous projects in budgets.

He added that it was now obvious that educated people were the ones institutionalising corruption in the country.

'These unpatriotic legislatures must be brought to book on why they have been padding budgets with projects and figures not approved by the House. They are ordering cars that sell at N17 million for N57 million. They are being delivered now.

'To them, Nigeria is not the focus. They must get everything for themselves. The country will have to be cleaned and I am happy we have a president, despite every other thing, who has now stood up to fight corruption and we should him.

'This country will progress if we reduce corruption to the barest minimum,' the Ijaw leader noted.

Meanwhile, the Vice Chancllor of ECU, Professor Timothy Olagbemiro, lauded the chancellor of the university, Chief Clark, for the standard the university had attained within the short time of its existence.

He informed Chief Clark that the university had been accredited by the National University Commission (NUC) and the Council of Legal Education respectively, to offer law degree programme in the institution. - Tribune.