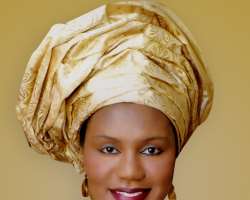 Ebelechukwu Obiano, wife of Anambra State Governor Willie Obiano, has threatened to slap critics of the governor’s vegetable export scam, a source has revealed to SaharaReporters. “If you bring your face it will be slapped. Big time,” she promised in in a WhatsApp message forum after her husband was criticized for his $5 million vegetable export scam.

“If you bring your face it will be slapped. Big time,” she promised in in a WhatsApp message forum after her husband was criticized for his $5 million vegetable export scam.

The source shared screenshots of the exchange between the aggrieved Mrs. Obiano and a member of the forum, reproduced here, in which she issued the threat.

It was c
confirmed that the woman making the threat was in fact Mrs. Obiano after the source searched her number in the TrueCaller app, returning the name “Osodieme Osodieme,” which is Mrs. Obiano’s nickname.

In addition to this source, an administer of the WhatsApp group also confirmed the number as belonging to Mrs. Obiano.

This development comes less than a week after a SaharaReporters investigation revealed that Mr. Obianofalsely claimed his State earned $5 million in vegetable exports. As a part of his campaign promoting Anambra State's agricultural industry, Mr. Obiano used images of vegetables that he claimed had been grown in Anambra State.

That claim however failed the test of authenticity. When we subjected the pictures to a reverse image search, it was revealed that they had been pulled from other websites.

SaharaReporters reached out to Mrs. Obiano on the same phone number listed in WhatsApp. She denied ever threatening to slap any person and repeatedly said that she would not ever do that.