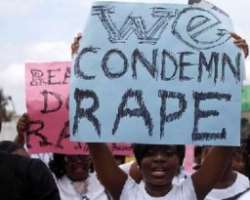 A 45-year-old woman was on Sunday gang-raped and tortured by gunmen in Abakaliki, the Ebonyi State capital.

The victim told the News Agency of Nigeria that a group of armed men, numbering about five, forcefully pulled her from the commercial tricycle (Keke), which she boarded.

According to her, the gunmen subsequently forced her into the Keke they boarded and drove off alongside two motorcycles they hired.

She added: “They took me to a swampy bush behind the San Diego Hotel, Kpirikpiri, Abakaliki, where they gang-raped, tortured and abandoned me, thinking I was dead.

“A good Samaritan came to my rescue and informed the police who took me to a hospital where I was placed on intensive medication.”

She said the attack was premeditated, alleging that the gunmen might had been hired by her estranged husband who hailed from Enugu State.

She said: “I reported him at the Family Law Centre, Abakaliki over his incessant assault and inhuman treatment, which causes me deep physical and emotional trauma.

“During the last sitting of the Centre's court, he boasted that my case with him will end when I am 'eliminated'.”

The Public Relations Officer of the Ebonyi State Police Command , DSP George Okafor, who confirmed the story, promised that the command would get to the root of the matter.

Okafor said: “No arrest has been made so far on the issue as we are currently concentrating on saving the woman's life.

“Investigations into the matter will, however, be pursued to its logical conclusion to apprehend and prosecute the culprits.”