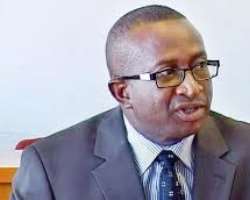 Edet Inam
Former governor of Cross River State, Mr. Clement Ebri, has given thumbs up to President Muhammadu Buhari for nominating former Leader of the Senate, Victor Ndoma-Egba(SAN), to chair the board of the Niger Delta Development Commission(NDDC).

Ebri said the nomination of Ndoma-Egba was a step taken in the right direction because of his wealth of experience in public and community service.

Speaking to journalists in Calabar, Monday, Ebri said: &quot;I commend Ndoma-Egba&quot;s nomination for the NDDC top job. He has the requisite experience required to perform creditably. I think we should be expecting a lot of development of infrastructure in the entire nine states of the Niger Delta.

&quot;His appointment is a clear example of fixing a square peg in a square hole by President Muhammadu Buhari.

&quot;Ndoma-Egba is a nationalist, and I have confidence that under his watch as chairman, every part of the region will witness tremendous development&quot;.

Ebri who was third republic governor of the state, stated that from the names listed by the president to serve on the board of the commission, they should have no difficulty working assiduously for the development of the Niger Delta.

Ebri tasked the people to the Niger Delta region to extend their support to members of the NDDC board, which he believed would be inaugurated as soon as the Senate resumes from recess.

In a related development, the APC in Cross River State has given kudos to President Buhari on the appointment of its members to serve on the Board of the NDDC.

Aside from Ndoma-Egba (SAN), the deputy governorship candidate of the party in the 2015 general election, Mr. Sylvester Nsa, was nominated by the President to serve as the commissioner representing the state on the board.

The APC described the appointment of Ndoma-Egba and Nsa as commendable, as they have what it takes to deliver the services required of them for the people of the Niger Delta region and the state.

The party also commended President Buhari on the appointment of other persons from the state to serve in other capacities in his administration.

A press statement signed by the State Publicity Secretary of the APC, Mr. Mens Ikpeme, reads in part: &quot;the All Progressives Congress (APC) Cross River State wishes to thank the President and Commander-in-chief of the armed forces, Muhammadu Buhari, for his show of love to the people of Cross River State through his recent appointment of Chairman Niger Delta Development Commission, &quot;Senator Victor Ndoma-Egba and the Commissioner representing Cross River State, Chief Sylvester Nsa into the Board of NDDC; the Minister of Niger Delta Usani Uguru Usan, Head of Service, Angela Oyo Ita, Chief of Naval Staff, Ibok Ete Ibas; and Special Adviser (Prosecution to the President) Chief Okoi Obono-Obla.

&quot;We also wish to assure you that these people you have chosen to deliver the democracy dividend to Nigeria and the region in particular will not disappoint you in your efforts to change Nigeria for better&quot;.