Witchcraft Operation In The World Today 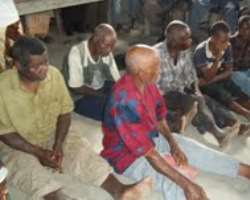 Witchcraft manipulation is a reality in every system of existence. The negation of this however is the outcome of ignorance and topsy-turvy of truth. The objective system of reality is a realm of psychic attack hitherto characterized by ubiquitous manipulation of metaphysical powers of witchcraft operation.

Be informed that witches and wizards on earth are more than normal human beings and their nefarious modus-operandi is the outcome of the perpetration of evil on earth. Remember the biblical saying, “Suffer not the witch to live”. Are you one of them? Then be careful for someone will certainly rise against you soon.

I am persuaded to inform you that this is the era of absolute spiritual emancipation and the Great GOD of creation is providing you with a guide line via this exposition. I humbly implore you to receive it, take it, assimilate it and use it for your warfare against the huge and bogus numbers of witches and wizards’ masquerading on earth even on various alters of divine sanctuary as men of modern God.

Witch-craft is counterfeit spiritual authority; it is a process of using a demonic power to dominate, control, manipulate and hypnotize people. On the other hand, it is also defined as the ability of some people to affect others with or without any physical contact. To some philosophers witchcraft is an illusion and thus seen as African belief hence in the sight of the West, Africans are seen as people who have profound interest in superstition.

Some people tell us that Europeans no more believe in the reality of witchcraft. Still history is our witness of the evils, atrocities and abominations committed in Europe and America because of nostalgic beliefs in witchcraft powers. It is a fact that many Western philosophers are of the view that witchcraft is not real consequently, they further declared it an illusion; but it could interest you to know that there exist many witch covens all over Europe.

As we are all aware that witches embrace paganism as their religion and worship Satan. Yes, these covens which meet monthly are presided over by a high warlock (male witch). When they meet in the covens, they carry out many ceremonies like nude dancing around a bonfire, chanting, the performance of magical rituals, and other things. Witches claim that they are followers of the old (pagan) religion which began in Babylon. It is only when one belongs to the school of materialism that the concept of witchcraft becomes illusion, meaningless and fake.

Don’t forget that materialism has never been proved as a true metaphysical philosophy. At this point be informed that the first problem of witchcraft is to establish its practical efficacy in philosophical science and theory. It is my objective contention that since researches into ESP (Extra-sensual-perception), clairvoyance and Telepathy have proved them efficient practically, on the above note, the reality of witch craft becomes less illusive scientifically.

Witchcraft which is a form of psychic attack is a reality in the world of man. Several stories on our daily newspapers are enough to convince us of the reality of witchcraft. When the people of God came out from Egypt the lord instructed them thus, “There shall not be found among you any one that maketh his son or daughter to pass through fire, or that useth divination or an observer of times, or an enchanter, or a witch” Deut. 18:10.Whenever I speak of “Witchcrafts”, “Witch” or “Witches” in this article, I am specifically speaking of both the witches and wizards.

The physical earth is a realm of psychic attack inherent in the esoteric manipulation of witchcraft operation. This psychic manipulation as designed by the arch deceiver [“the god of this world” 11 cor. 4:4] Satan and his cohorts are occult, metaphysical and abstract in reality. In the advancement of esoteric craft, Satan and his agents become ultimately one but in operate they vary. Now there are five kinds and types of Witchcraft namely: Black Witches, White Witches, Kali Witches, Abra Melin Witches and Blind or Garden Witches.

They are used by any witch anytime anywhere and anyhow. Just as a Farmer or Gardener makes use of his garden without any resistance from the garden, so also the conscious witches make use of the Garden witches anyhow without any resistance. NOTE: This exposition is not designed to give us a historical background of the already mentioned witches but is aimed at exposing different systems, skills and method used by the witches to enslave mankind.

As said earlier a Garden Witch is a man or a woman whose body is simultaneously used for witchcraft operation or experiment. Such a person may not be aware of the manipulation. He may be a weak Christian who speaks in tongues and goes to church regularly. The Biblical instruction evident in Exodus 22:18 that “Thou shalt not suffer a witch to live” are not for this group of people. If you are under any form of manipulation of the Witches and Wizard be informed that I have an effective recipe for your freedom.

These groups of witches also have their own process of undergoing initiation. This initiation however, does not place them on the same stead with a real witch rather it enables the real witch to use them for any exercise of their choice. At the same time, he is kept in the prison of witchcraft operation. This initiation is another way of setting a mark of destruction of witchcraft manipulation in the life of the fellow.

There are many ways through which one can receive or undergo Garden initiation of witchcraft. An agent of darkness can initiate some people into the Garden witchcraft and consequently keep them in the prison of demonic manipulation through fruits, bread, alcoholic and non alcoholic drink, groundnut, biscuit etc, that is offered to them. The moment one undergoes this initiation he becomes nothing but a mere (play ground) food or meat for the powers of darkness and as a result, the fellow suffers many things in the hand of witches