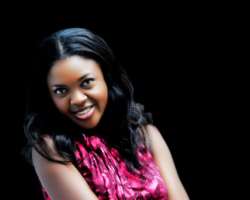 The tall and sexy movie diva, Omoni Oboli who featured in the multiple AMAA awards winning movie, Figurine is about to score another feat if the movie she went to shoot in Toronto eventually comes out. The movie 'Anchor Baby' written, produced and directed by Lonzo Nzekwe features Omoni Oboli from Nollywood, Sam Sarpong from Hollywood in America, Terry Oliver, a Canadian singer and song writer to mention but just a few of other prominent actors involved in the multi-million dollar project.

The mother of three, Omoni has just added a year and there is strong indication that she will be hosting her fans, most especially those ones on her fanbook page any moment from now. Omoni is married to Nnamdi, a youthfully looking but extremely wealthy easy going dude who is into gas and oil and other lucrative businesses.

Information at our disposal reveals that the movie the Nollywood superstar, Omoni was in Toronto to shoot is said by the actress to have been one of her best jobs in terms of energy injected into it and she's really living up to the standard as a good script-interpreter despite her status as a married woman.