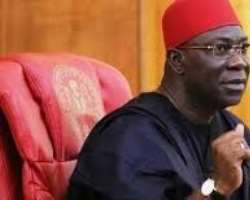 The South-East caucus of the All Progressives Congress (APC) appears willing to work with the party to remove the Deputy Senate President, Ike Ekweremadu from office, SUNDAY PUNCH, has learnt.

It was gathered in Abuja, on Saturday, that party leaders from the zone are particularly interested in his removal to boost the party's strength.

They argued that Ekweremadu would use his position to further entrench the Peoples Democratic Party,  if they allowed him to remain

A leading party member from the zone, who asked not to be named for fear of retribution said, 'We are not ignorant, we know that the new Senator from our zone, being a green horn and the only one, cannot unseat Ekweremadu.

'We will be willing to trade him in for a grade (A) ministry and a choice committee.

'Ekweremadu's continued stay as the Deputy Senate President may hamper the growth of the APC in our zone.'

When contacted, the party's National Vice-Chairman in charge of the South-East, Emma Eneukwu, said he was at a zonal meeting and was not in a position to take questions.

However, a chieftain of the party and member of the South-East caucus, Mr. Osita Okechukwu, said, 'To be honest we candidly advise Ekweremadu to step down for our brother, Sen. Ben Uwajumogu.

'His first excuse for usurping the APC's slot was to represent Ndigbo. Now that Ndigbo has secured a Senate seat, good conscience and equity demands his voluntary exist.'

Okechukwu, who is now the Director General of the Voice of  Nigeria, in response to a question on why he was pushing the ethnic card, said, 'He (Ekweremadu) is the one who boasted with the ethnic card. Honour dictates his exist simple and short.'

He told one of our correspondents, 'The leadership of the APC will decide on who replaces Ekweremadu only after the party has succeeded in sacking him. But I think (the Majority Leader of the Senate) Senator Ali Ndume is qualified to replace Ekweremadu.

'The party will come up with several options and at that point in time, the replacement will surely come from the party. Nobody will move against the party. The party will liaise with us and we will all agree.'

Another member of the APC caucus, who spoke to Sunday PUNCH  on condition of anonymity, said the ruling party was banking on the Senate Standing Rules forgery case to remove Ekweremadu.

He noted that the APC was aware that Saraki and Ekweremadu enjoy the backing of the majority of senators making it difficult to get a two-third of the senators to end their leadership.

The senator said it would be after the Deputy Senate President had been sacked that the party would decide on who should replace him.

The lawmaker said, 'The Standing Rule document was forged. I can assure you. It is most likely that when a judgment is delivered on the case, it will show that the leadership of the Red Chamber is null and void. Definitely, they will go. But how long will the case last, I don't know; it all depends on the Federal Government.'

'It is certain that the document was forged and the court may sack the leadership of the Senate eventually. They are just buying time. Should the judgment be against them, they will appeal. That is why I said I don't know how long the case will last, but they will go.'

The senator also hinted that should the alleged forged rules be voided by the court, lawmakers in the chamber would have to vote for the leadership of the Senate openly.

He said it was then that the APC senators who voted for Saraki and Ekweremadu, which was against the choice of the party, would fall back to the side of the party.

He said, 'The real Standing Rule says that if there is a division, everybody will stand up and declare where they stand. How can you then stand before the camera and vote against your party?

'No APC senator will stand up and vote against the party openly on live TV. At that state, every lawmaker must stand up and declare where they stand and who they are voting for.'

It may be recalled that the PDP through its National Publicity Secretary, Dayo Adeyeye cautioned the APC against towing the path of hounding the DSP out of office.

He said, 'The statement by the APC National Chairman confirmed our suspicions about a sinister plot to remove the Deputy Senate President.

'We advise them against this I'll advised venture because the Senate is a bipartisan Senate and they are free by law to elect their leaders.'

Speaking in a similar vein, Mazi Bismarck Oji, Exec Director, Centre for the Advancement of Literacy and Leadership said people like the Imo State governor who are championing the cause to remove the DSP are wasting their time.

He said, 'Nobody takes Rochas seriously in the South East.  He could not secure any principal office for two APC Reps from SE, specifically from his Imo State.

'He couldn't secure any grade A ministry for South East. In fact, the brainy Prof and former VC from Imo was even made a junior Minister to someone that does not hold a PhD.

'There's no service Chief from South East  and South East has nobody in the Security Council. In fact, Rochas is making all these noise to drawn or divert attention from the protests over the quality of election that produced the APC Senator elect. For 99 percent of SE, a bird in hand is worth more than a billion in bush.'