We can't rule out force against militants: Defence Minister 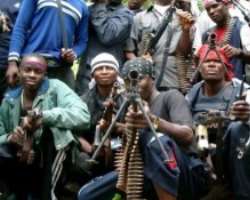 The Minister of Defence, Gen. Mansur Dan-Alli (retd.), has declared that the Federal Government cannot rule out force against the Niger Delta Avengers if peaceful dialogue fails.

Dan-Alli stated this during a courtesy call on Bayelsa Deputy Governor, Rear Admiral Gboribiogha Jonah, at the Government House in Yenagoa.

The defence minister was in the Government House in company with Chief of Defence Staff, Gen. Abayomi Olonishakin and the Commander, Operation Delta Safe, Rear Admiral Joseph Okojie.

Dan-Alli said his visit to Bayelsa State with the CDS was to see what was on the ground and the operational capability of the armed forces within the zone.

The minister said, “One of the cardinal objectives that brought us here is to look for peace. But we are also preparing in case the peace and negotiations are not favourable.

“We are also on our own side making all the necessary security arrangements so that there will be peace in the Niger Delta.”

When reminded of recent statement credited to the military that they could not rule out the use of force if the current peace process with the Avengers failed, the minister reiterated, ” We cannot rule it (force) out.”

When told that there would be collateral damage if the military declared war on the militants,  Dan-Alli said that there had never been war without peace.

“We know our rules of engagement, we cannot use forces like that without any mandate.  So, collateral damage does not come in here. As far as I am concerned, we are just trying to stop criminality in this general area.”

On his part, Olonishakin said the military has a constitutional duty to ensure that there is peace, advising those destroying the country's critical infrastructure to put on their thinking cap and come to the negotiation table.

The CDS said, “We have allowed truce to ensure that whoever that wants to come to talk can be given the opportunity, then while giving the opportunity, we also ensuring that our troops are in position to make sure that the truce is well implemented.

“However, we want to tell those who are sabotaging the critical infrastructure that they have to put on their reasoning cap and ensure that they come to the negotiation table and discuss.

“We in the military will enforce and ensure that critical infrastructures are protected and ensure that anyone found sabotaging the economy is properly dealt with and we will also ensure that those who are being involved in all the criminality are brought to book.”

In his remarks, Jonah called for the establishment of special brigades of the Nigerian Army in the state, with a view to curbing criminal acts and contributing to the overall peace and stability of the Niger Delta.

Jonah noted that the creation of two battalions as earlier approved before his retirement from the military would not only assist in securing the nation's critical assets in the state, but also reduce response time in the event of any security challenge.

He also lauded the Federal Government's security outfit in the Niger Delta, Operation Delta Safe, for its initiative to involve communities in intelligence gathering towards stemming security challenges in the region.

Describing the initiative as thoughtful, Jonah pointed out that no security arrangement in the area would succeed without the effective collaboration of the people, given the peculiar terrain of the region.

While expressing gratitude to the Minister of Defence and his entourage for the visit, the Deputy Governor reaffirmed the state government's commitment towards partnering with security agencies to achieve enduring peace.

According to Jonah, the Seriake Dickson administration would not renege on its stance on zero tolerance for crime and criminality, as it is in the best interest of the state to provide a peaceful environment to attract investments.