The President of the United States of the Internet 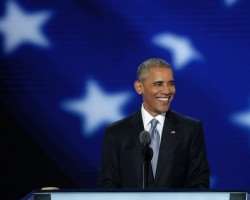 There's an old email from my mom that I've kept. I guess I probably received emails before it, but hers — from February 2005 — was one of the first in my shiny new Gmail inbox, and as such is among the oldest that has stuck around, one of the first bread crumbs in my own long digital trail. I'd sent her a message titled “Barack Obama.” Maybe we'd talked about him in a class at school; maybe someone had shown me his speech at the 2004 Democratic National Convention. I listed his virtues: Harvard Law Review! Magna cum laude! Virtuosic rise through Illinois politics!

“Wow, he sounds great,” my mom wrote, re: Barack Obama. But.

“Be honest,” she continued, “you do know in your heart that there is no way this country is ready for President Obama, right? Keep fighting the mutha fuckers!”

Obama's 2008 presidential campaign famously capitalized on the internet in ways that no campaign had before. He leaned on voters to Google him, his political record, and his past speeches. He advertised on YouTube. He enlisted Silicon Valley heavyweights like Marc Andreessen to help him find new ways to raise funds. His staff shuffled volunteers between districts and states with historic ease, and built a database of supporters who not only propelled him to the Oval Office, but who also were reenlisted four years later, with more and better tools, to keep him there.

In his Wednesday-night address in Philadelphia , 12 years to the day after his breakthrough at the 2004 convention, Obama paid homage to the internet. His inspiration, he said, was “every American who believed we could change this country for the better, so many of you who'd never been involved in politics, who picked up phones, and hit the streets, and used the internet in amazing new ways that I didn't really understand but made change happen.”

“Time and again, you've picked me up,” Obama said. “I hope, sometimes, I picked you up, too. And tonight, I ask you to do for Hillary Clinton what you did for me.”

He appealed repeatedly to the power of the American people, sometimes with tears in his eyes. When the audience began to boo at a mention of Donald Trump, Obama cut them off: “Don't boo. Vote.”

Obama was — is, for another six months — the first internet president. It's not just that the web helped him win the presidency; it's that it was under his watch — he who fought so hard to upgrade his smartphone  — that our devices and social media presences became appendages. The way we consume news changed, as did the way we share our thoughts, the way we talk to the people we love, and the way we look to 1600 Pennsylvania Avenue and contemplate what we see. This, of course, would have been true of any president who happened to lead during these past eight years — but it was Obama, the one who used the internet to win, who first led us into a new kind of digital citizenry.

It's shown up in both the big things — watching that streaming video of his East Room lectern as we waited for the president to confirm the reports that Osama bin Laden had been killed — and the little ones, the silly curiosities like his suit color or selfies that have fed the internet's voracious appetite, something with which he's made no secret of his annoyance. Obama was the first president we could beam into our friends' pockets — the first president we could hold in our hands. Others will follow him in this regard, but he will always be the first.

So, as he stood at the podium Wednesday and tipped his hat to the power of the web, Obama delivered a message that has resounded over the past eight years: Keep fighting the mutha fuckers.