I am committed to democracy and development, Wike tells editors 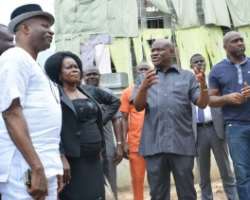 c
Rivers State Governor, Nyesom Wike, has declared that his administraton has surmounted politocal and

people of the state, adding that his commitment to development and democracy is irrevocable.

made to face endless rerun elections and politically-induced security challenges.

Guild of Editors led by its President , Mrs Funke Egbemode.

of Rivers State and his love for the state.
The governor stated that he combined infrastructural development and workers welfare within his

first year in office, because that was the way to revive the state’s economy which was battered by the

immediate past administration.
He said despite the propaganda being sponsored by the opposition, Rivers State is safe for investments

and development.
He said : “It is important for everyone to know that Rivers State is safe and is witnessing massive

development. In the next two months, we are hosting many national events. We have already hosted

several national events in the last two months.
“For me as a governor, this is a privilege to serve my people and I will give it my best shot. I am ready to

lay down my life for the state. My commitment to the development of Rivers State is total. I will

forever defend it.”
The governor said those planning to rig elections in the state will not succeed because the people are

ever vigilant to stop them.
He said : “Stealing the mandate of the people is a serious crime and it is worse than armed robbery. In

this case, those involved plot to use arms to steal the mandate of Rivers people. That will never

succeed. They came to rig the March 19 rerun elections and the people resisted.”

State, poinng out that majority of the information in the public domain are concocted by the oppsition.