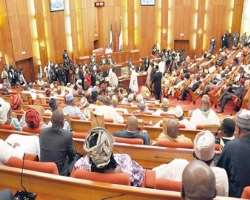 Senate Committee on Foreign Affairs, on Thursday, concluded the screening of the 47 ambassadorial nominees sent for screening and confirmation by President Muhammadu Buhari.

The screening, which began on Tuesday, took three days, because of the number, as each of them answered various questions from various subjects; from current affairs to foreign policy.

After the screening, the Senate President, Dr Bukola Saraki advised the 47 ambassadorial nominees to be good ambassadors of the country wherever they were posted to after their confirmation by the Senate in September.

He informed the already screened nominees, who came to his office with the Senior Special Assistant to the President on National Assembly Matters (Senate), Senator Ita Enang and members of the Senate Committee on Foreign Affairs, to give the country a good image.

He congratulated them for being worthy of their nomination and their demonstrated determination to serve their fatherland in foreign lands.

Saraki said: 'Please, make us proud at whatever post you are sent to, by ensuring that your embassies are not in anyway known for negative news here at home and abroad, in line with the good  image the country is enjoying now.'

He equally charged the executive to, as quickly as possible, forward names of non-career nominees to the Senate on resumption in September, for similar thorough screening exercise, saying 'the earlier we have substantive ambassadors at our various foreign posts, the better at this critical time of repositioning the country for better.'

Senator Enang described the screening exercise as the most thorough he had witnessed during his time in the National  Assembly, as he also commended Monsurat Sunmonu-led committee for its show of dedication and commitment.

According to him, 'let me use this opportunity to commend the Senate committee for the way and manner in which the screening exercise was carried out. I must say it is the most thorough and intellectual I have witnessed in my time here.

'Also, the committee has demonstrated, by its decision to screen the nominees, despite the Senate being on recess, that it is committed and dedicated to service of our dear nation.'

However, out of the 47 ambassadorial nominees, Borno State has the highest number of three, with Kwara, Edo, Ekiti and Anambra states having two each, while remaining states, except Bayelsa, Ondo, Plateau and Ebonyi states, have one each.