I Am The Messenger With The Message---Obaseki Tells Edo People 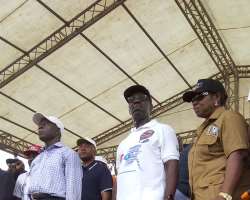 The candidate of the All progressive Congress APC In Edo State Mr Godwin Obaseki has said he is the messenger that has the most credible message for the people of Edo State in the forth-coming governorship election in the State.

Obaseki who was speaking today during a campaign at Oregbeni in Ikpoba-Okha Local government area of Edo State said, there are so many messengers in the State but all of them have nothing to deliver in terms of development plan.

According to Godwin Obaseki APC have a message of industrialisation to the people and job creation for the youth our State. I want to fulfill the Grate dream of our founding fathers by encouraging more investors to come and invest in Edo State saying that "I have over thirty years working experience in the investment sector. You can trust me with your votes because I have the message that the investors are waiting to hear. I have worked with investors so I can speak in their language.

He maintained that the opposition party candidate in the State has no business or investment experience therefore he cannot give what he doesn't have. Only a man who has work can Understand what it takes to create a job.

In the Agricultural sector we will create Employment for more than 200,000 youths and secure the future of our University graduates. The assurance of having a job after graduation will serve as motivation for our youth to go to school and helping to develop as well as improve upon our human capital development.

The governorship hopeful who said he has a message of hope in the area of infrastructure said 'Adams Oshiomhole has build Schools but I will build more. Oshiomhole has constructed road and I will construct more roads. The APC administration in the past Seven and half years has laid a solid that can carry a sky scraper and as the in-coming Governor of the State I will build enduring structure upon the solid foundation we already have on ground.

Obaseki who was also the Chairman of the State economic and strategic team said he has made adequate praperation and employment plan for our Technica Education Students. I will add value and give new meaning to technical education which will serve as a ready market for industries and investors who will need human and technical assistance for the development of the Industrial sector which is an aspect of the Grater future that awaits the people of Edo State when He becomes the Governor of the State.

Earlier the APC campaign train led by Comrade Adams Oshiomhole, was in Benin City Headquarters of Oredo Local Government area where Mr. Godwin Obaseki assured the people of effective Governance Maintaining that leadership effectiveness depends on how effective government institutions carry the weight of governance and service delivery. As the next governor of Edo State, Obaseki promise to bridge the institutional gap that links decisions to social policy and implementation in governance.