Capital controls on forex should be lifted – Onwuka 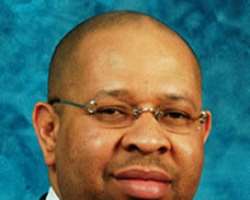 A former Managing Director/Chief Executive Officer of Diamond Bank Plc, Emeka Onwuka, has urged the Central Bank of Nigeria (CBN) to remove all the controls introduced in the wake of the country's foreign exchange rate crisis.

The move, he said, would encourage foreign investors to come into the country.

Onwuka said this while delivering a speech at a book launch in honour of the outgoing Group Managing Director/Chief Executive Officer, UBA Plc, Phillip Oduoza in Lagos on Wednesday. The book is titled, 'Dynamics of the Nigerian financial system'.

He said the recent managed floating of the rate of the naira and the various reforms undertaken by the CBN were welcome developments.

According to him, the CBN require the patience and support of Nigerians for the market to settle and achieve the desired objectives of the new regime, adding that the rates at which the market settles will ultimately result in improved liquidity in the forex market.

Onwuka added, 'It is expected that the forex market reforms will resolve the issues around the official forex market but the gap between that market and the parallel market may still remain at unacceptable levels. The CBN should consider lifting the forex ban on the 41 items currently excluded from the official market.

'This is an appropriate time to effect this, as the items will be funded from other autonomous sources outside of the CBN. Following on the back of this, all capital controls that were introduced on the onset of the forex rate crisis should be lifted.  This will encourage entry of foreign investors as capital is a coward and stays on the sideline when there are doubts on its exit from any territory.'

However, he noted that it might be necessary to place a one-year minimum tenor on repatriation of all Certificate of Capital Importation transactions to discourage entry of 'hot money' given the current forward/futures products in the forex market.

The Nigerian banking market, according to him, is facing serious headwinds from slow Gross Domestic Product growth, falling forex reserves/availability and regulatory pressures.

He said, 'The regulatory pressures on banks include: stricter regulatory oversight on Systematically Important Banks which increases the pressure to meet regulatory requirements; slower deposit growth fueled by lack of economic growth and public sector developments such as TSA; slowdown in lending with liquidity constraints and deteriorating macro environment; and inflation and growing risk premium, which drives interest rates.'

He, therefore, urged banks to refocus on the fundamentals of the trade, which include: offering seamless services to all Nigerian individuals and enterprises; driving further the digitalisation of banking services; elimination of the historic high cost to serve from the branching network; and maintaining highest standards on the management of credit.

On oil marketers receivables, Onwuka said there is currently a backlog of payments due to the downstream oil and gas companies and the receivables, which were funded by banks, are now past due in the books of most banks.

This, he explained, was compounded by the recent devaluation which has impaired the capacity of the customers to pay on outstanding trade obligations, adding that on the part of the government, the ability to clear the payments was limited by the dwindling earnings being experienced.

He said, 'In resolving this situation, the government may consider floating a bond programme to cover the backlog including fporex differentials to date and the banks will be made to subscribe to the extent of their exposure to the oil marketers, thereby switching the relevant risk assets to liquid assets to improve their balance sheets. The government will then introduce petroleum products tax that will be used to fund the redemption of the bonds.'

He also pointed out that the payment system in the country had improved significantly with high volumes of transactions being undertaken electronically.  'The cashless policy of the industry has a gone a long way in driving the improvements in the payment system,' he stated.

Despite the improvements highlighted, Onwuka said there remained significant amount of cash outside the banking system and very low banking penetration in Nigeria.  He said measures of penetration such as deposit to GDP and Credit to GDP remained low at below 30 per cent whereas the BRICS countries are averaging about 50 per cent. – Punch.