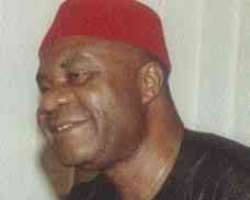 •Ogbulafor
If there is one man that things do not really add up politically in Nigeria today, that man is Prince Vincent Ogbulafor. Ogbulafor is the National chairman of the ruling Peoples Democratic Party (PDP).

Since the inception of the current democratic dispensation, Ogbulafor has not really enjoyed the best of times. Whenever the Abia born politician thinks, he has made it big politically, all of a sudden, he finds himself at ground zero politically.

The January 1999 governorship election, Ogbulafor squared up against the former governor of Abia State and chairman of the Board of Trustees of the Progressive People Alliance (PPA), Dr. Orji Uzor Kalu. While the PDP national chairman was the standard bearer of the All Peoples Party (APP), Kalu contested the election on the platform of the PDP. In that contest, Ogbulafor lost to the youthful Kalu. After that electoral defeat, he crossed over to the PDP where he was rewarded with a ministerial post.

Like one whose kernel was cracked for him by benevolent spirits, Ogbulafor was soon catapulted to the position of National Secretary of the ruling party. But his joy of being the national scribe of the PDP did not last. Soon, former President Olusegun Obasanjo, who was instrumental to his being made a minister and national secretary, came after him. He was booted out of office as the PDP national secretary with ignominy alongside his then boss, Chief Audu Ogbe.

When the ruling party could not agree on whom would be party chairman between former Governor, Sam Egwu and his statesman, former senate president, Senator Anyim Pius Anyim, the Governors Forum brought out the Umuahia Prince from political doldrums and foisted him on the PDP as its National Chairman.

Since 2007 until recently, the PDP helmsman was enjoying what could be termed his best time politically. Before President Umaru Yar'adua took ill, Ogbulafor was strutting all over the land with as the leader of the ' biggest party in Africa'. Everywhere he go, he tells his audience that the rule of his party has come to stay at least for next sixty years. But things are fast changing for the former minister. The bell is tolling for him again. The confidence with which he speaks in recent times is gradually being replaced by trepidation and anxiety for his political life and integrity.

Expectedly, since the emergence of the group, all has not being well in the PDP. The group activities are believed to be targeted at the National Working Committee of the PDP led by Ogbulafor. Apparently out of fear of the danger the Reform group portends for the present party leadership, the NWC last Monday suspended Nnamani and eighteen other members of his group from the party.

Though the former senate president has continued to maintain that his group is not after their national leadership of their party, he said the change which they are canvassing would sure sail through.

'Whether you accept what PDP Reform Group said now or not; change would come. If Ogbulafor becomes a collateral damage or becomes a victim of the change, so be it, but it should be understood that it is not aimed at him. That was why I started by saying that it is institutional. The problem we have is that each time we try to personalize things. Vincent and I have never quarreled in any shape or form neither have we ever disagreed on any issue,' Nnamani told Daily Sun recently.

Daily Sun gathered that the main grouse of those pushing for reforms within the PDP is what the consider the undemocratic nature of the party. The party is known for most often not allowing its action reflect the opinion of the generality of its members. For instance, party stalwarts are quick to point at Anambra and Imo State, where the NWC under Ogbulafor took actions that were considered unilaterally by critical stakeholders in the party.

Nnamani said he had expressed concern when the National Chairman dissolved the party executive in Imo state and set up a Caretaker Committee without recourse to the party's constitution. According to the former senate president, 'I came back here and wrote him a letter telling him not to do so because it is against the principle of democracy since the executive has a tenure of office and at a campaign rally he announced that the executive committee was dissolved and unilaterally appointed a caretaker Committee.'

Apparently to stave off opposition against Ogbulafor, the party's National Executive Committee (NEC) at it meeting on Tuesday April 27, 2010 passed a vote of confidence on the party's NWC. But that even that has not succeeded in garnering the much needed supported for the embattled party chairman.

Though the prime movers of the reform agenda in PDP have been suspended from the party, their message seem to well acceptable to the members of the party. For instance just as the NEC meeting was on, a group of protesters from Abia were demanding for the sack of Ogbulafor who incidentally hails from that state.

A chieftain of the ruling party in Anambra State, Mr. KOP Odidika told Daily Sun that the party's leadership is undemocratic. He said the party has suffered serious political losses under the present leadership of the party.

Consequently, for the Lagos- based lawyer, the best thing for the PDP and the country is for Ogbulafor to quit as the party's leader. 'The leadership of the party has been very undemocratic. For reason best known to them. They have been autocratic and we are clamoring for change in their attitude and conduct. If I were Vincent Ogbulafor I will resign. Because he has not improved the party but rather, the party has retrogressed since this man assumed leadership of the party.'

Odidika said though he does not belong to the PDP Reform Group, he shares their ideology. He recalled how the party lost the last governorship election in Anambra State because the party leader foisted a candidate on the party.

' Find out more about this man, whether he was intellectually equipped to lead a party of ten people. Not to talk of a party like PDP. That is why PDP is in the state it is. Somebody who has no business leading a village meeting, is leading PDP.I don't care how he was foisted; the fact is that he ought not to be there. He messed up everything about PDP in Anambra State. Anambra is a PDP state,'Odidika added.

But this is not the first time party stalwarts would be seeking to sack Ogbulafor. Only in September last year, elder statesman and former minister of Information, Chief EK Clark asked the party leader to resign his position. According to him then, Ogbulafor had the attitude of being meddlesome, and that his 'meddlesome activities' accounted for the crisis and dwindling fortunes of the party in several states.

'I have decided as a senior party member to speak out on the ills of the National Executive Committee of the party. I demand that Prince Ogbulafor be relieved of his position as chairman of the PDP. He is no longer fit to lead the party to victory in a free and fair election in 2011.'

Clark held also that the party is a catalyst for progress, but that Ogbulafor had not been able to put the party together.

His ICPC travails
The battle to retain his seat, as National chairman of the PDP is not the only battle Ogbulafor is fighting. Last week the Independent Corrupt Practices and Other Related Offences Commission (ICPC) filed a 16-count charge against him and four others over alleged N104million fraud before an Abuja High Court. The fraud was allegedly committed when the National chairman was a minister during Obasanjo's second term.

Already, the anti graft agency has gotten the leave of the court to arrest and arraign Ogbulafor. It is expected that he would be arraigned in Court soon. But Ogbulafor said, ' It is all about ambition and the 2011 election. Most members of the group have ambition-some want to be governors, some senators and some want to be picked as presidential running mate. And they want vantage positions in the party both at the state and national levels.

'Unfortunately, many of them see me as a stumbling block to their ambition. They think I am standing on their way. They see the PDP NWC as presently constituted as not favoring them. And they want to b ring in people they think will do their bidding. That is what the whole noise is all about. It has nothing to do with the good of the country or the party itself. But selfish ambition.

' I never committed any fraud, in the first place. I was only a minister and the NEIC was under my ministry. Mine was a supervising ministry.

' In any case, this matter came up in 2006 and I was invited by the ICPC and after that nobody raised the issue again. Then they said the money was N28million.Now they are bandying different sum of money.'

Ogbulafor is fighting a battle he cannot but win. A loss for him would mean the end of his politics. This is because one, he already out of political reckoning in his home state which is currently being controlled by the PPA. Besides, if the court finds him guilty of fraud that certainly would be the end of the road for him. Will he survive or will he go down with ignominy?