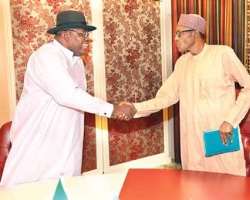 The use of force as threatened by the Federal Government to quell the militancy in the Niger Delta region will not work, Governor Seriake Dickson of Bayelsa State has said.

The governor also said it was the duty of political leaders to mobilise stakeholders to resolve the problems through dialogue.

Speaking to State House correspondents after a closed door meeting with President Muhammadu Buhari at the Presidential Villa, Abuja, on Wednesday, he expressed confidence that only dialogue would bring a lasting solution to the Niger Delta crisis.

Dickson's remark followed renewed threat by the top echelon of the military to deploy force to rout the militants, whose activities had greatly impacted on the production of crude oil and revenues for the Federal Government.

Dickson observed that because of the complex nature of the region, only peaceful dialogue could guarantee positive results.

'I have said the issues in the Niger Delta, the terrain, the historic nature of the issues and challenges are such that military solution may not be the way forward.

'And where there are issues, those issues need be addressed and it is also our duty to network like I'm doing now, to ensure that problems that are identified as the root cause of some of these challenges are looked into.

'The military solutions, as I have always maintained, is not the right option. We are hopeful that the ongoing discussions will yield the desired result.

'I have always been in support of negotiations, of dialogue as the sustainable way forward. Dialogue will bring out the issues and then we will all unite around these common issues to move our country forward.'

The governor, whose election was confirmed by Bayelsa State election petition tribunal sitting in Abuja, on Tuesday, said he was also in the Presidential Villa to commend President Buhari for his non-interference in the political process of his state.

He urged indigenes of the state to discountenance reports that Buhari influenced the elections of the state and called on his All Progressives Congress (APC) challenger, former Governor Timipre Sylva and other politicians, to work with him to move the state forward.

On his discussion with the president, he said 'I came in this afternoon to have discussions with Mr President. That is because my position has been and I believe that is the right position every political leader should take which is that after general election, political leaders and citizens must unite and address common issues and find solutions to the problems of our country.

'All over the world, once nations have crisis, once nations come under attack, leaders unite across political lines. And I came to have discussion with Mr President and I thank him  for that opportunity and we cross-fertilised ideas around issues of security.

'Of course, as you know, Bayelsa is central to the maintenance of law and order and stability in our country, particularly in the Niger Delta region. Bayelsa is the epicentre of the issues that have to do with the Niger Delta.

'We had fruitful discussions on the need for political leaders, governmental and political leaders to work together to support the work of the security agencies and foster better understanding of even people who have grievances and that we are committed to do together.'

Meanwhile, the militant group, the Niger Delta Avengers (NDA), has said no amount of weapons of warfare deployed by the Federal Government will stop it from paralysing the oil economy of the country in the region.

The group, through its spokesperson, Brigadier-General Mudoch Agbinibo, in a statement published in its website Tuesday night, said the worse President Buhari could do was to commit genocide against the ordinary Niger Deltans, but the economy of the country would pay for it.

Alleging that the seeming delay tactics being employed by the Federal Government to kick-start the much-awaited dialogue with militants in the region was to have ample time to import drones from Europe and the United States to tackle insurgency in the region, the group vowed that the country would not be able to export its crude oil any longer.

'Mr President, you can purchase all the drones in Europe and Untied States. It won't stop the Niger Delta Avengers from bringing the country's economy to zero.

The worse you can do is to kill poor innocent people which the military is good at, but know that the Nigerian economy will suffer,' the group threatened. - Tribune.