Central Bank jacks up interest rate to 14 per cent 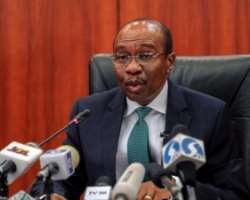 The Central Bank of Nigeria  on Tuesday raised its benchmark interest rate to 14 percent, a 10-year high, a measure seen by experts as a reaction to the continuing decline on  the naira currency.

The bank’s governor,  Godwin Emefiele, said on Tuesday that the regulator hopes that  the rate hike will encourage savings and investment.

Nigeria is suffering inflation running at 16.5 percent, and the oil-dependent government is short of cash and foreign currency because of low oil prices and output slashed by militant attacks.

Nigeria’s government spent a year supporting the naira before allowing it to float in June. It has fallen from an official rate of 198 to 310 to the dollar while ordinary Nigerians are forced to buy the dollar at up to 378 naira on the parallel market.

“No doubt there has been weakening in capital adequacy ratio, liquidity and NPL but not to the extent that it create any panic or worry to anybody, any stakeholder in the Nigerian banking industry. I seize this opportunity to say that the strategic health of the Nigerian banking or financial institution remains strong at this time. There is no need for anybody to begin to panic or worry that any bank is in distress.

“We took certain actions about the activities or to express our unhappiness over the misdemeanour in the activities of certain board and management of a bank and doing that does not mean that bank is in distress,” Emefiele said.

“At the end of a voting exercise to reach a consensus for the monetary policy rate, five members of the Monetary Policy Committee (MPC) voted to raise rates to 14 percent, while three wanted rates unchanged,” said Emefiele at a press briefing in Abuja, at the culmination of a two-day meeting of the MPC.

Analysts had said naira yields may have to rise to near 20 percent before bond investors are keen to re-enter the country, as naira devaluation falls short of attracting offshore fund managers.

Nigeria's government bond yields of 15.1 percent are the highest after Egypt, among 31 emerging markets tracked by Bloomberg, and are negative in real terms, with Nigeria's inflation accelerating to 16.5 percent in June.

The move to normalise yields and a more orthodox monetary policy are a step in the right direction say analysts.

“Given the cost-push nature of inflation in Nigeria, which largely stems from the shortage of FX, we believe that this was the right thing to have done.   It demonstrates a commitment to FX liberalisation, which alone will undo some of the bottlenecks that have contributed to inflation,” Razia Khan, Africa Chief economist at Standard Chartered Bank, said.

“Establishing more credible policy and attracting greater inflows is about as pro-growth as policy can be, given the challenges currently facing the Nigerian economy. Today's tightening was an important step in re-establishing the credibility of monetary policy in Nigeria, and should allow for a gradual recovery in FX inflows.”